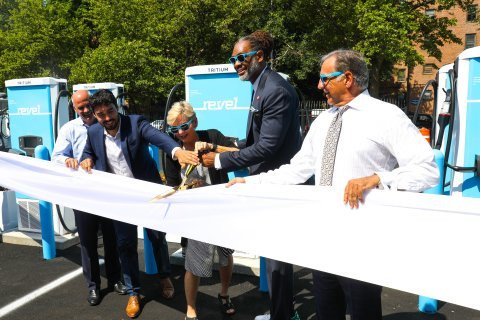 Electric transportation company Revel has announced that it has opened its first electric vehicle (EV) fast charging Superhub to the public at the historic former Pfizer building in Bed-Stuy, Brooklyn. The Superhub is the largest universal EV fast-charging depot in the Americas with 25 chargers and is the first of a network of Superhubs planned by Revel across New York City. For the first week that the Bed-Stuy site is open, charging will be free to members of the public.

Before the opening of Revel's first Superhub, there were only two publicly available EV fast-charging stations in NYC's urban core. Most depots in the city are in further-flung locations like JFK airport, and many charge a fee just to enter the parking lot. New York City also has a low rate of electric vehicle adoption, with only 14,000 EVs out of the 1.9 million cars and SUVs registered in the city.

"It's no surprise that EV adoption is lagging in our city- the infrastructure just isn't here yet, and the stations that do exist aren't accessible to most New Yorkers," said Revel CEO and Co-Founder Frank Reig. "Our Superhubs are designed to reach as many people as possible in the neighborhoods where they actually live. This is what NYC needs to move towards an electric future and we're excited to get started."

"Today's ribbon-cutting isn't about just one charging station, even though it is the biggest universal charging station in the country," said United States Secretary of Energy Jennifer M. Granholm. "It represents our vision for building a clean energy economy on the foundation of good-paying jobs, overcoming and improving the health outcomes of communities too often left behind. As the old saying goes—if you can make it in New York, you can make it anywhere. And we need electric vehicles and charging stations everywhere, in cities and towns all across America."

"Shirley Chisholm was not afraid of change. She was a spokesperson for the young women of Bedford-Stuyvesant, and her message resonated across the world. We are willing to find creative ways to support residents," said New York City Council Member Robert E. Cornegy Jr. "This year I am launching my 4th Shared Economy summer, which connects the new technology of app-based transportation to support mom-and-pop businesses. Now Bed-Stuy is taking lead by becoming home to the largest universal fast charging depot in North America. We are showing that fighting global problems like greenhouse emissions can help our local businesses, so we welcome Revel as part of our community."

"As we work to combat climate change, the future of transportation is electric, but many drivers won't feel comfortable buying an EV until they see a critical mass of public charging stations around the city," said Con Edison CEO Tim Cawley. "The Brooklyn superhub makes it convenient for current EV owners to charge up and will encourage more New Yorkers to consider buying an electric car."

"We are extremely pleased to have partnered with Revel on this project. Access to fast, reliable, and convenient charging solutions is critical to the uptake of EVs, and the Superhub is an ideal solution to help more New Yorkers adopt electric transportation," said Tritium President of the Americas Mike Calise. "Projects like the Superhub give urban drivers the confidence that they can leap an EV with access to a site providing rapid charging solutions all day, every day."

"We can't tackle climate without tackling transportation. Just as the Biden Administration is prioritizing electrification as part of its federal climate agenda, New York is accelerating its shift to electric vehicles by installing infrastructure like this new fast-charging depot," said Julie Tighe, President of the New York League of Conservation Voters. "Our environment wins when governments, communities, and companies like Revel work together to invest in clean transportation."

Revel chose Tritium's recently launched RTM fast charger for its Brooklyn site. This is the first time the model is available in North America, and at 75kW, the chargers provide EV drivers with 100 additional miles in about 20 minutes. Two of the charging stalls are specially designed to ensure Americans with Disabilities Act (ADA) compliance. Revel also contracted with MP2 Energy LLC to ensure that the charges are entirely powered by renewable energy sources.

Revel also worked closely with Con Edison to make its Superhub vision a reality and is the first fast-charging operator participating in Con Edison's PowerReady program to complete a project.