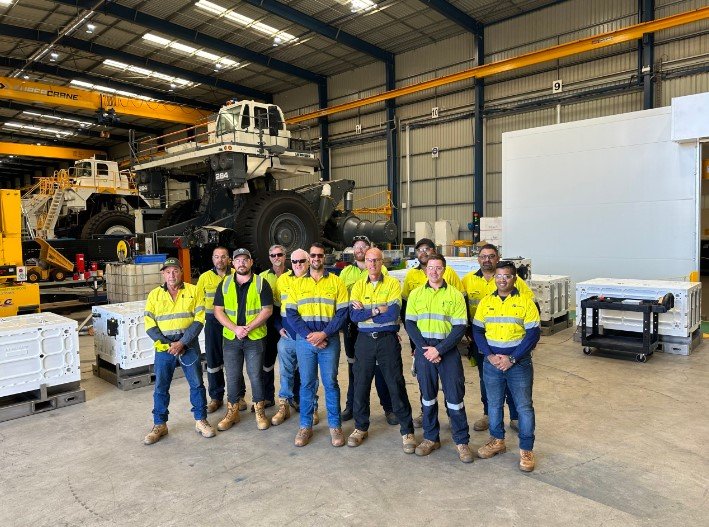 UK-based WAE (Williams Advanced Engineering) Technologies has delivered to Australia the largest battery of its kind, ready to be installed in a prototype zero-emission battery electric mining haul truck that mining company Fortescue is developing with Liebherr.

The state-of-the-art 1.4MWh prototype power system sets the pace for ground-breaking innovation in heavy industry and is a bespoke design intended for integration into a 240-tonne mining haul truck, according to the company.

The battery will be integral to Fortescue's US $ 6.2 billion decarbonization strategy to help eliminate fossil fuels from its terrestrial iron ore operations, which includes replacing its existing diesel-fueled fleet with battery electric and green hydrogen powered haul trucks.

A team of 50 engineers and technicians are responsible for developing the pioneering power system, WAE claims. The battery weighs 15 tonnes, measures 3.6m long, 1.6m wide and 2.4m high, and is made up of eight sub-packs, each with 36 modules, all individually cooled and each with its own battery management system.

WAE Technologies CEO Craig Wilson said, "Today marks the latest milestone in the rapid development of state-of-the-art zero emission technology for Fortescue's mining trucks. This high-performance power system not only boasts the highest energy storage of its kind, but will also be the first to offer 30-min fast charging."

"This system is the first of many technologies that can help enable Fortescue to realise its industry leading 2030 net-zero target. Powered solely by renewable energy, it will help prevent enormous amounts of fossil fuel from being used in the mining industry, with the goal to not compromise the vehicle's load capacity. This is an inspiring example of what can be achieved combining Fortescue's pioneering green energy vision for its global vehicles and WAE's extensive expertise in advanced batteries."

The company claims this as a massive achievement completed in record time, and marks several firsts for an electric mining haul truck battery, with energy storage of 1.4MWH, the ability to fast-charge in 30 minutes and capacity to regenerate power as it drives downhill.

Fortescue Future Industries CEO Mark Hutchinson said, "WAE and Fortescue are working together to seek to decarbonise faster and more effectively than any other major industrial company in the world. The battery system, designed for our zero emission battery electric mining haul trucks is an important part of our strategy to reach real zero terrestrial emissions (Scope 1 and 2) across our iron operations by 2030".

"WAE's battery expertise compliments FFI's green hydrogen projects and cements Fortescue as a leader in the technologies needed for the green energy transition", he added.

The battery has arrived at Fortescue's workshop in Perth, Western Australia, and will be assembled and installed, before its transported to the Pilbara for world-leading testing on site in 2023.