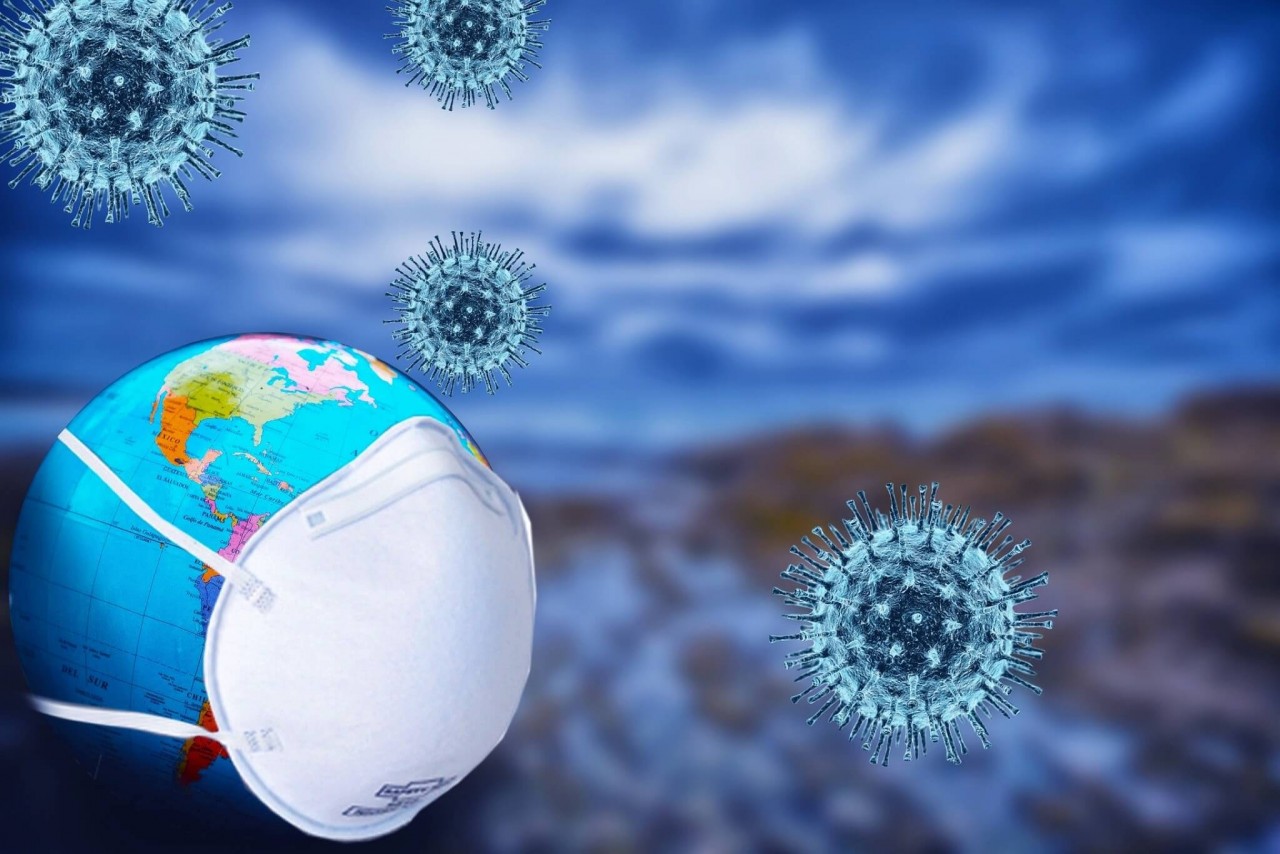 The global energy demand declined by 3.8 percent in the first quarter of 2020, with the power mix shifting towards renewables across all major regions in the world.

In April, IEA released the, 'Global Energy Review 2020' a comprehensive report that estimated the impact of the COVID-19 crisis on global energy demand and CO2 emissions. The report is based on data collected from 30 countries, representing more than two-thirds of global energy demand.

'In absolute terms, the decline is equivalent of losing the entire energy demand of India, the world's third-largest energy consumer,' IEA stated.

According to the IEA analysis, the demand for all major fuels plunged following the announcement of lockdown (partial or complete) by countries around the world. The global demand for coal was the hardest hit—observing a drop by almost 8 percent relative to Q1 2019. Oil demand was negatively impacted too, and declined by nearly 5 percent in the first quarter. However, the impact of the pandemic on global gas demand was more moderate, at around 2 percent, as gas-based economies were not strongly affected in Q1 2020.

The good news, however, is that renewable remained the bright spot in the Q1 2020, and the only source that recorded a growth in demand amidst the pandemic.

"Only renewables are holding up during the previously unheard-of slump in electricity use," said
DrFatihBirol, IEA Executive Director, commenting on the growth posted by renewables.

Analysis from IEA data through mid-April shows that countries in full lockdown are experiencing an average 25 percent decline in energy demand per week, and countries in partial lockdown, a decline on an average 18 percent.

In China, where the COVID-19 lockdown was first implemented with around eight weeks of lockdown in Q1 2020, the drop in energy demand was the most, i.e. seven percent in comparison with Q1 2019. 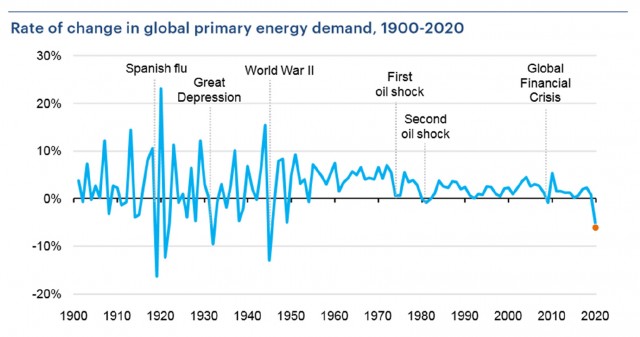 As for India, the impact on Q1 2020 energy demand was modest, with demand increasing by 0.3 relative to Q1 2019. India implemented its first three-week complete lockdown on March 25, therefore, major impact on weekly energy demand was only felt towards the end of March and the impact is projected to be notable by Q2 2020.

In terms of consumption levels, with the shutdown of the commercial and industrial operation, it has resulted in a significant drop in electricity demand, but residential electricity demand showed an uptick, with patterns on weekdays resembling that of a prolonged Sunday. 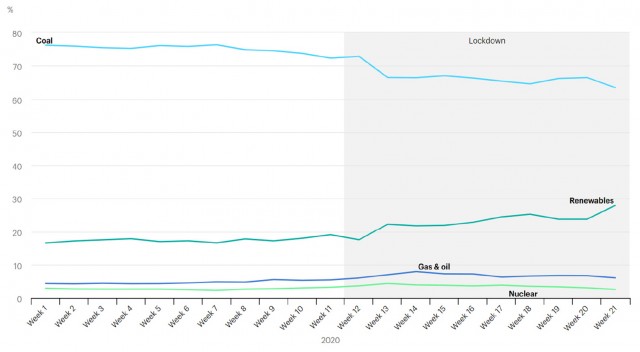 Electricity mix in India, January – May 2020, Source: IEA, based on POSOCO India

What is being observed almost across all regions of the world is that the demand depression has lifted the share of renewables in the electricity supply, as their output remains largely unaffected by demand.

According to the report, renewables experienced the largest increase, with their share jumping to almost 13 percent, over half a percentage point above Q1 2019. The change in the overall power sector mix was even more marked, with renewables increasing their share from 26 percent in Q1 2019 to 27.5 percent in the first quarter of Q1 2020.

The report underscored that in majority of the cases, renewables receive priority in the grid and are not asked to adjust their output to match demand, significantly insulating them from the impacts of lower electricity demand. Resultantly, the share of renewables in the electricity generation mix has recorded an increase with record-high hourly shares of variable renewables in Belgium, Italy, Germany, Hungary, and eastern parts of the United States.

"It is still too early to determine the longer-term impacts, but the energy industry that emerges from this crisis will be significantly different from the one that came before," DrBirol said.

According to IEA's latest weekly data, the gap between coal and renewables narrowed significantly in India.

Since the lockdown, the share of coal in the electricity mix is consistently under 70 percent. The share of renewable, which was at 19 percent in late March, jumped to 28 percent by the end of May.

In late May, with lockdown softening in many parts of the country the levels of electricity demand recovered while the rising share of renewables in the mix reflected their seasonal availability.

In India, the electricity demand dropped quickly with closure of factories and confinement measures being stringently imposed. The demand drop was most in the second week of the nationwide lockdown, at around 25 percent.

By the end of May, electricity demand is starting to show steady recovery, this can be attributed to increased demand in summers and softening of lockdown stringency in some parts of the country.

For the full-year estimates for 2020, IEA predicts that renewables demand is expected to increase in comparison to other energy sources. This is primarily because of low operating costs, and preferential access to many power systems. Further, with recent growth in capacity and some new projects coming online this year will boost RE demand.

The demand for other major sources of low-carbon electricity, such as nuclear power and biofuels, is expected to fall, too. In fact, nuclear power is set to drop by three percent in 2020 − from the all-time high it reached last year. The global demand for biofuels is expected to fall significantly as restrictions on transport and travel reduce road transport fuel demand, including that for blended fuels.