On the rise: renewables with storage

A renewable-powered future relies on suitable advancement in battery energy storage. As renewable+storage projects gain ground in the country, Debmalya Sen, Senior Consultant at Customized Energy Solution, explains how India has fared so far and the right way forward. 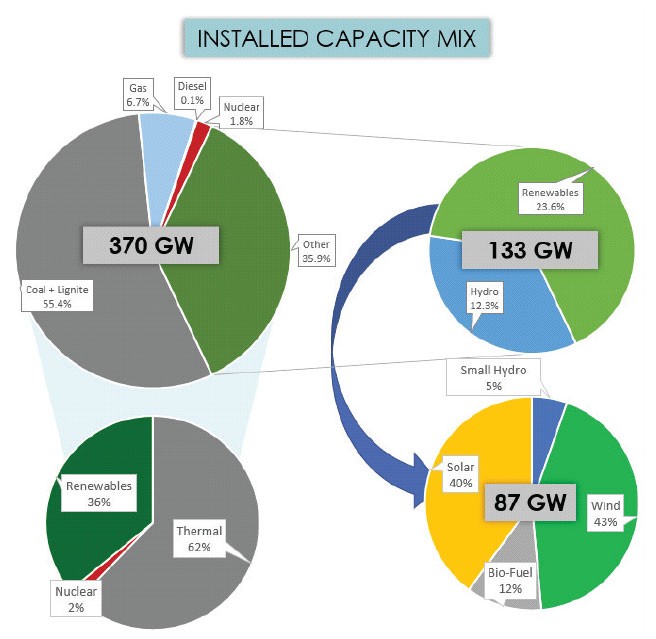 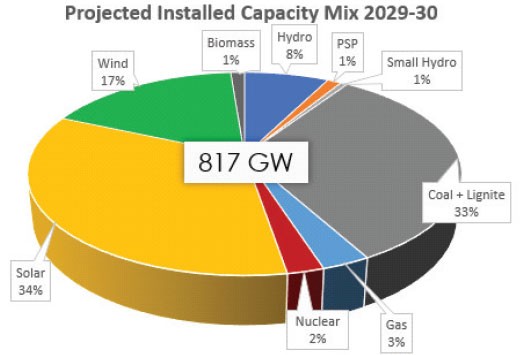 The Indian power sector has seen tremendous growth in renewables over the last five years, with 51GW of RE capacity being added to the grid. An ambitious target of 175GW by 2022 and 450 GW by 2030, would mean this growth story would probably continue undeterred. The question here though is - will the growth trajectory of RE be as smooth as it has been till now?
The decline in YoY growth of RE addition over the last two years shows that the sector has been facing challenges and the road ahead will not be smooth. One of the prime reasons for this is the variable nature of RE, which decreases the grid inertia and increases dynamics in the grid. Thus, there is a need to bring in sustainability to this growth.
Combining wind and solar seems to be a natural solution. India launched the RE Hybrid policy in 2018 with the objective of making this shift in the industry, but the bids that followed did not gather much steam. While some were undersubscribed, others were canceled. One main reason for the lack of interest was the low ceiling level which was applied to these tenders. But the bigger question is, will simply blending wind and solar solve the challenges? Yes, it may to some extent, but the issue of intermittency of RE will persist. To make hybrids successful and saleable as a concept for investments, storage is essential.
Over time, the technological improvements along with the drop in battery cell prices (specifically for battery storage) have made energy storage a tough competitor in comparison to other technologies. As on date, RE+battery storage is already more economical than newly built coal or gas peaker plants. Let us take recent examples: 1. the new coal plant Power Purchase Agreement that was signed between the State government of Madhya Pradesh and Adani specifies a tariff of `4.8/kWh with escalations for the next 25 years; 2. the 1.2 GW Solar Energy Corporation of India peak-power tender, which was won at an average cost of `4.3/kWh including storage for six hours; and 3. the more recent, 400 MW R-T-C tender won by Renew Power at a base year tariff of Rs2.9/kWh and at a Levelized Cost of Energy of Rs3.6/kWh. This clearly goes to show that RE with storage is becoming a more lucrative choice.

The story becomes more compelling because, as per the Central Electricity Authority of India, there are around 25GW of coal plants that are scheduled for retirement from 2022 to 2030, but there also around 34GW of coal plants that are being planned. Thus, the question here is, do we need to build more coal plants, or do we have other options? The Optimal Generation report released by CEA earlier this year projects a total capacity of 817GW from today's 370 GW. What is interesting to note is that the percentage of coal in the grid, which is 55 percent at present, is expected to drop to 33 percent, whereas the percentage of RE in the grid is projected to increases to 51 percent.
In terms of generation too, the percentage of RE is projected to increase from the current 10 percent to 31 percent in the future. The report further projects that in such a RE heavy grid if we want to keep RE as 'must run' then the technical minimum of coal plants has to be reduced from 55 percent. This, though, comes at the cost of lowering efficiency, increasing heat rate and CO2 emission from the coal plants, thereby increasing the per unit production cost. Studies forecast that keeping the tech min of coal constant, there can be as high as 40 percent curtailment seen in RE to balance load demand. Even then, due to the variability of RE we will still need to build coal plants. One way of optimizing this is to make RE more dispatchable, which can only happen when we make RE more reliable and extract higher utilization from it.

SECI recently came with innovative tenders with storage and also proposed three categories of storage linked to the tenders for the future:
1. Hybrid and peak power - To supply assured power during peak periods - 40 percent CUF
2. R-T-C RE: Round-the-clock renewables - 80 percent CUF
3. Firm flexible RE for 12-16 hrs with ±10-20 percent flexibility – 60 percent CUF
As per SECI, the deployment of energy storage on generation side will improve quality of power and plant load factor of the plant, and such tenders with requirement of high PLF will help in better utilization of transmission network and aid in reducing building of more transmission networks. This will also help in addressing high curtailment issues of RE, apart from helping in smoothing out high ramping requirement. Overall, this is a good move, and there has been an increased interest in such tenders in the industry.

The future of RE + storage tenders
A total of 18 tenders have been announced starting from the year 2018 to date, linked with mainly solar. The total battery storage requirement is around 350MWh and the duration allocated in a maximum of such tenders ranges between 1-2 hours, with the exception of recently won 1.2GW peak tender which has six hours duration. Initially, some tenders were cancelled post their announcement, some were delayed and continue to do so. However, on a good note, we saw the commissioning of NLC India's 20MW/8MWh solar with storage tender recently and Sunsource winning the Lakshadweep, Leh, and Kaza tender.
The road has not been smooth. There have been hurdles in the form of site clearances, right to work issues and others which delayed many projects but slowly the sector is learning to overcome the initial hurdles and is finding its ground.
There is a hope that now with guidelines for RE + thermal bidding and procurement being laid out and the Central Electricity Regulatory Commission paving way for connectivity rules for R-T-C tenders, the road ahead will give rise to exponential growth in the RE + storage sector. The CEA projects that by 2030 the generation-side will need 128GWh of storage to be sustainable. IESA projects that the RE + storage market will grow at an annual CAGR of 40 percent from 2019 to 2027. The total potential of storage associated with stationary storage from 2019 to 2027 is estimated to be 328GWh. This obviously will need proactive policy support and incentives. Recently, the government of India declared battery storage as a 'champion sector' and now with Atmanirbhar Bharat Abhiyan, the announcement of the domestic manufacturing of batteries will be out soon, according to NITI Aayog.
The way forward for making high-performing RE a success, is storage. RE alone, without being oversized, cannot generate a plant load factor (PLF) of more than 35 percent annually under optimum sizing. Thus, if we are talking of attaining annual utilization of 60 to 80 percent that will mean we need to oversize the RE portfolio; but by how much? Oversizing a renewable portfolio will also mean the signing of a third-party contract along with the contractual PPA with the Discom to sell off the excess power being produced over and above the contractual capacity to evacuate under the PPA. A high oversized RE portfolio has its own challenges, starting with getting a separate grid connection and evacuation clearances, to getting suitable third-party contracts laid.
Even with oversizing there will still be events in low resource months like April or October, where the required PLF will not be reached and certain months like June and July, where the PLF can actually shoot above 100 percent keeping the contracted load as reference. Another issue with oversizing is, which resource do we give major oversizing -- wind or solar? Solar is better, as CAPEX/MW is lower. But oversizing solar will not serve the purpose of getting round-the-clock power or higher utilization, as a solar resource is only limited to six hours a day. Thus, the major oversizing activity will need to be done through wind, but it should also be kept in mind that the CAPEX of wind is double than that of solar.
So, how can storage help here? Storage can manage the oversizing to an optimal level, and the storage portion can help in further smoothing the load curve. It can help in utilizing some of the excess energy getting produced to get charge and discharge in such durations when the cumulative RE load is low, say, during late-night hours. The sizing of storage can play an important role as oversizing of storage will yield in low utilization and inadequate sizing will yield in the occurrence of multiple charge-discharge cycles. Taking an example of the R-T-C tender, which Renew Power won; the portfolio of RE in the project can be as high as 1300MW, against a contractual agreement of 400MW, which further can be topped up with storage of 100MW/400 MWh.
Is such a jump in utilization factor requirement necessary? Can we not take it in a more sustainable and step-wise manner? Can we not make use of hybrids with storage and keep the utilization factor in a range that will not demand oversizing? If oversizing has to be done at all, the same will be limited or optimized. Oversizing to a great extent will affect the energy-ecosystem in many ways. For instance, it will bring about dynamics in transmission network planning. No matter how much the RE portfolio is oversized, there will be lull periods (as explained before) which will remain and also such periods where the RE portfolio will be enough to attain 80 percent utilization and the storage associated with the project will not at all be utilized (monsoon period). Thus, putting a higher capacity of storage will also not be beneficial.

The way around
The SECI stakeholders' discussion brought to light several options and alternatives. Apart from the above challenges, one very important point discussed was: why not focus on making forecasting and scheduling of RE stricter? Why not set targets for renewable dispatches, rather than making the RE curve flatter. The bell curve nature of RE can be retained, and focus could be on making that curve smoother. This will also require storage to be included in the RE portfolio, giving it that much needed tag of being reliable and responsible as a fuel source. This will also help in better utilization of the transmission network and save unnecessary new installations.
Ideas like existing projects with and without PPA and transmission approval should be allowed for hybrids, this will also help in meter utilization of the T&D network and help in better utilization of land and RE resource. RE may not beexpected to serve the base load, that is already being served; the focus can more towards making renewables more reliable to serve the variable and peak load. It will be more efficient if rather than going for high PLF tenders, tenders were matched as per what the Discom requires. This also will call for better demand forecasting.
Overall, the way we are progressing is right, but a little tweak here and there will help make the move more sustainable over the long run. Or else, in a bid to fix a short-term issue, we may end up creating a long-term problem for ourselves. Thus, it is very essential that the steps taken today are farsighted and sustainable, especially in today's world where technological disruptions are taking place more rapidly than ever before. 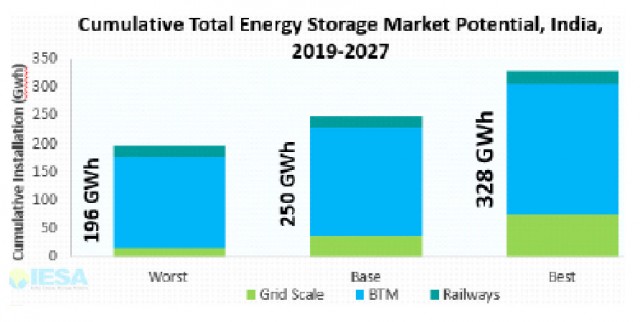