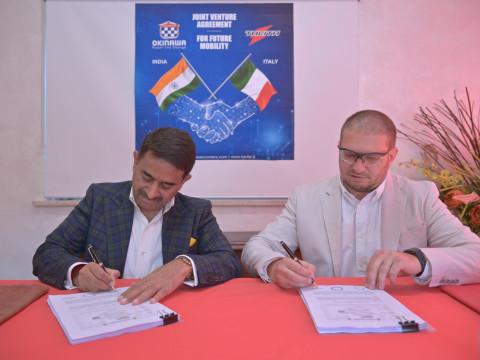 Okinawa Autotech has announced that it has partnered with Italian electric and performance bike firm Tacita to set up a joint venture for the manufacturing of futuristic scooters and motorcycles as well as powertrain for domestic and international markets. The Joint Venture (JV) company will be based in India and commence production in 2023, Okinawa Autotech said.

The 2023 range, to be equipped with connectivity systems having Okinawa technology, will include a scooter and a high-end performance motorcycle. Tacita has offerings for recreational, competitive off-roads, and electric superbikes with a no-emission engine. Tacita designs and manufactures its powertrain, controller, motor, and battery pack with BMS (Battery Management System).

Leveraging Tacita's capabilities, the bikes would go into production early next year at the second facility of Okinawa in Rajasthan, the company said. The JV company will pursue the goal of lowering the use of fossil fuels as well as establishing the two partnering companies in the future as a top players in the electric two-wheeler space, it stated.

Okinawa, on its part, will provide the local development of the future product and its production line while Tacita will provide the powertrain – controller, motor, battery packs, and BMS, Okinawa said.

Noting that there is a steady and conscious shift in consumer preferences and his company has witnessed a growing demand for premium and performance electric motorcycles in India, Sharma said the Italian partner will help Okinawa in creating a marketplace that matches the demand for futuristic technology and products. "Their advanced and futuristic technology will also further broaden and strengthen our existing product range," he added.

The company said the period up to the first half of 2023 will go into designing, development, patenting, and finally the vehicle testing on the road. Road tests will be carried out both in India and Italy in all weather conditions. Part of the tests should include an inaugural voyage from Okinawa headquarters in India to the Tacita headquarters in Italy, it said.