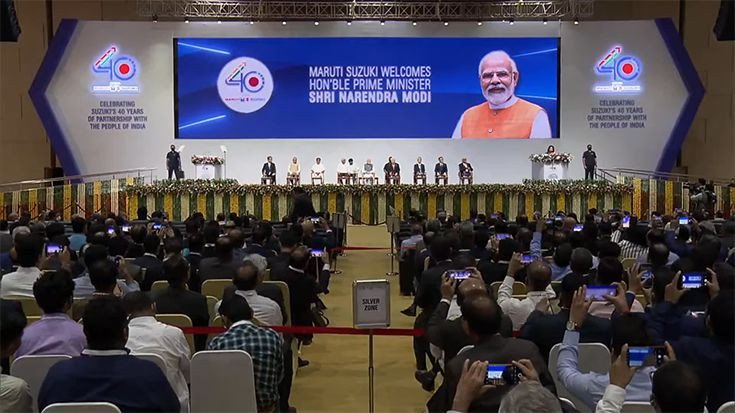 PM Narendra Modi laid the foundation stone of one of Suzuki group's defining projects in India – the Suzuki Motor Gujarat Electric Vehicle battery manufacturing facility at Hansalpur in Gujarat. The event was held as a part of a programme marking the commemoration of 40 years of Maruti Suzuki in the country.

Suzuki Motor Gujarat Private Limited's (SMG) battery plant will be set up with an investment of around ₹ 7,300 crores to produce advance chemistry battery cells meant for electric vehicles.

Speaking at the event, Prime Minister said, "Be it E2W or E4W, they don't make any noise. This silence is not only about its engineering, but it is also the beginning of a silent revolution in the country. As part of the government's efforts to strengthen the EV ecosystem, various incentives are being provided to Electric Vehicle buyers, along with numerous steps such as rebates in income tax and simplifying the loan process".

"To boost the supply, PLI schemes in automobile and automobile components manufacturing are being introduced", Narendra Modi said. A lot of policy decisions have also been taken to prepare a robust EV charging infrastructure. "A battery swapping policy has also been introduced in the 2022 Financial Budged. It is a certainty that with the strengthening of supply, demand and ecosystem, the EV sector is going to progress", he added.

The event saw the presence of Satoshi Suzuki, Ambassador of Japan to India, Chief Minister of Gujarat Bhupendra Patel, T Suzuki, President of Suzuki Motor Corporation, and Chairman of Maruti-Suzuki R C Bhargava among other dignitaries.

Back in March this year, Japan-based Suzuki Motor Corporation (SMC) announced an MoU with the state of Gujarat to invest approximately ¥ 150 billion (approximately ₹ 104.4 billion) for local manufacturing of battery electric vehicles (BEVs) and their batteries.

It was also reported that as per the signed agreements, SMG will be investing ₹ 31 billion for ramping up the production capacity for BEV manufacturing at its facility in the year 2025.