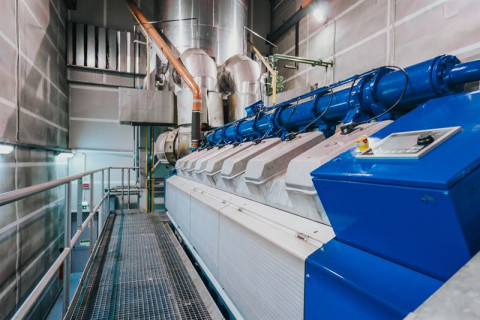 The technology group Wärtsilä has announced that it will with the Portuguese energy solutions provider and independent power producer Capwatt in the testing of green hydrogen and natural gas blend fuel for the Capwatt power plant located in Maia. The project will start in Q1, 2023 and it aims at testing blends of up to 10 vol. percent green hydrogen. The combined heat and power plant which provides energy for Sonae Campus and the national grid currently operates with a Wärtsilä 34SG engine running on natural gas. This will be one of the first cases where green hydrogen is used to lessen the carbon footprint of an existing gas-fueled Wärtsilä power plant.

The Wärtsilä engine at the site is already capable of operating on gas with up to 3 percent hydrogen. In order to reach the targeted level of 10% blending to meet the specific needs for Capwatt, modifications will be made to the engine, as well as its control system and the plant automation system. Capwatt intends to produce green hydrogen using an electrolyzer, powered by renewable energy.

"We are committed to decarbonising our operations and we see the blending of hydrogen and natural gas for fueling this plant as a significant step towards achieving this goal. Wärtsilä is a company with great experience and know-how in this field, and we look forward to working closely with them in this ground-breaking project," commented Sérgio Rocha, CEO at Capwatt.

"As a technology, the combustion engine represents a viable solution for enabling the transformation to utilising future fuels. The flexibility of the Wärtsilä engines already plays an important role in allowing a far greater share of renewable energy to be incorporated into power systems."

The project is in line with the country's National Hydrogen Strategy, which aims to increase the share of hydrogen in energy consumption by 5 percent by 2030 in the industry sector. During the coming decade, the aim is to have 2.0 to 2.5 GW of installed hydrogen producing capacity, and to have 10 to 15 percent hydrogen injected into the natural gas grid.

Capwatt has a portfolio of nearly 160 MW of cogeneration plants that can benefit from this project's know-how, which will play a significant role on decarbonisation of thermal energy demand, enabling the energy transition of its industrial clients.

Wärtsilä engines can be operated on hydrogen/natural gas blends with up to 25% hydrogen, and the company is working towards an engine and power plant concept for pure hydrogen operations by 2025.