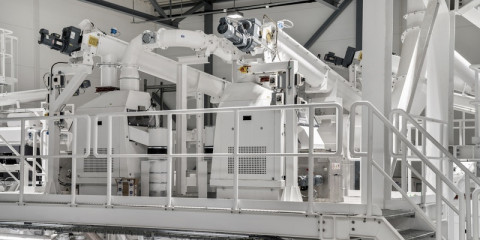 Said to be the largest EV battery recycling plant in Europe, the plant is capable of processing approximately 12,000 tons of battery packs per year (around 25,000 EV batteries).

"With the plant now online, a sustainable solution for handling Norway's entire volume of electric vehicle batteries being retired from the market, or reaching end-of-life, is now available," stated Northvolt in its official statement.

As per Northvolt's estimate, Hydrovolt can recover and isolate some 95% of the materials in a battery including, plastics, copper, aluminum, and black mass (a compound containing nickel, manganese, cobalt, and lithium). Further, the company has incorporated a number of novel concepts designed to maximize the recovery of materials found within the plant, including a dust collection system that ensures valuable material typically lost through mechanical recycling steps is captured.

"Norway has been leading the world in the adoption of electric vehicles for some years, but what has been missing is recycling capacity to ensure a sustainable solution for those batteries as they reach end-of-life," said Peter Qvarfordt, CEO of Hydrovolt.

"Today, Hydrovolt is scaled to handle the entire volume of end-of-life batteries in Norway, but we're now looking towards expanding to ensure we're prepared for the higher flows of batteries we know are coming," he added.

"Batteries play a key role in the world's transition to renewable energy. Through Hydrovolt, we are laying the foundations for a sustainable and circular supply chain for batteries in Europe," commented Arvid Moss, Executive Vice President in Hydro.

"Batteries reaching end-of-life will get a new life through the recovery of black mass and aluminum. Aluminum can be recycled with only 5% of the initial energy required to produce primary aluminum, which makes it a perfect material for a circular economy."

Northvolt noted that the recycling plant is aimed at improving the sustainability of the battery industry and also fulfilling emerging European regulations governing batteries, including forthcoming mandatory recycling targets. Specifically, the recovery of black mass is believed will help reduce the dependence on mining as a source for primary raw materials, and all the relative risks and vulnerabilities associated with it.

Processing black mass into battery-grade material requires a hydrometallurgical treatment which is currently being established at Northvolt's Revolt Ett recycling plant in Skellefteå, Sweden. By 2025, it is expected that Hydrovolt will produce over 2,000 tonnes of black mass annually.

"The metals used in battery production are finite, but by substituting raw materials mined from the Earth with recycled materials we can not only cut the carbon footprint of batteries but enable the sustainable long-term use of lithium-ion battery technology," commented Emma Nehrenheim, Chief Environmental Officer of Northvolt.