Volkswagen's Power Day signals that traditional automakers are fast catching up with EV behemoth Tesla. Could the German automaker surpass Tesla's EV sales by 2025? Probably, and it could be sooner than anticipated. 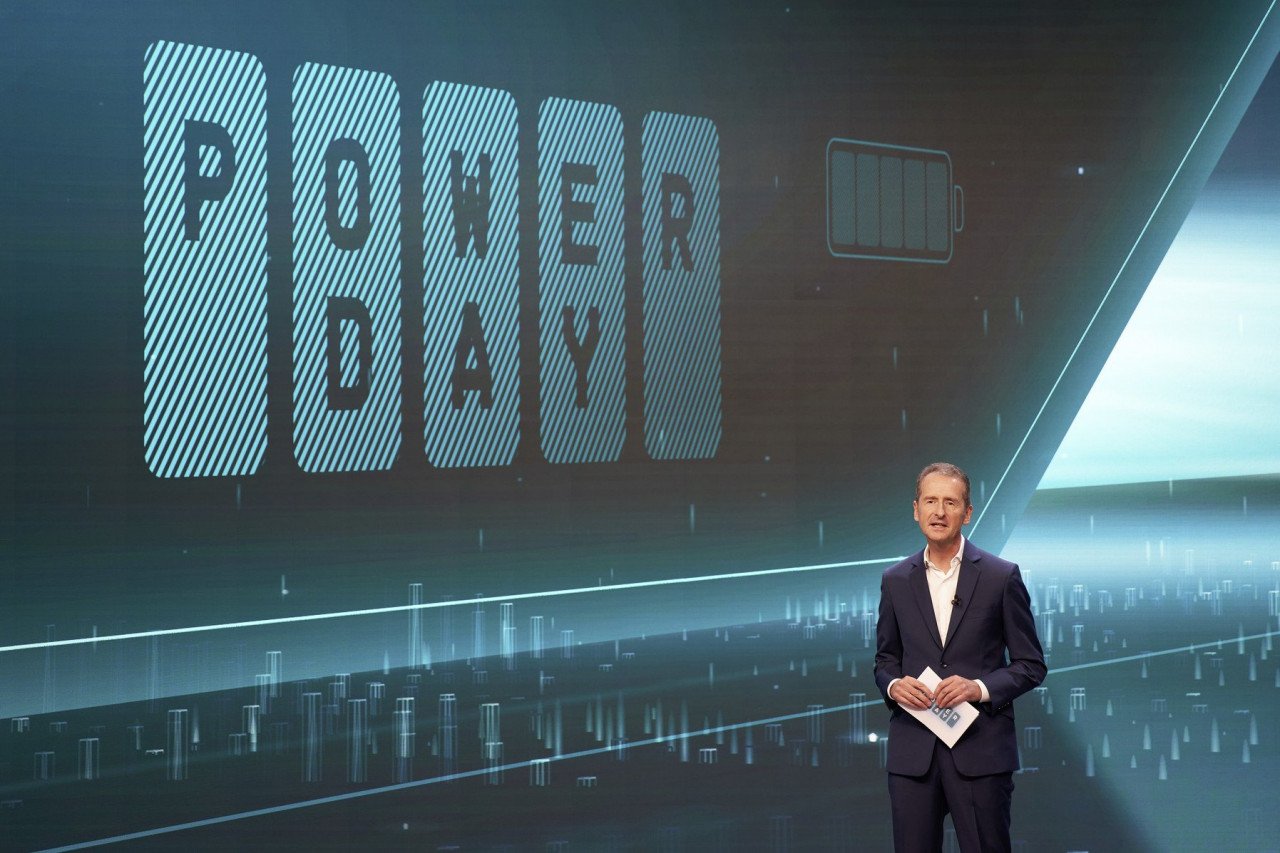 Garnering over one million viewers worldwide, the two-hour live stream outlined the Group's ambitious technology roadmap for EV batteries and charging infrastructure up to 2030.

With an impactful Power Day, followed by the company's annual meeting, Volkswagen AG's shares saw a historic 21 percent boom on March 16, reaching a record high of €309.40. Reports suggest this was the highest share price since the €352.59 recorded before the 2008 financial crisis.

So, what exactly did Volkswagen announce?

At the core of the company's technology roadmap are two key pillars: first, advancing battery technology to get higher-performing, low-cost batteries. And second, vigorously expanding the public fast-charging network globally to boost the adoption of EVs.

Standard Battery to Bring Down Cost

The automaker is striving to make significant advances with the battery system for all its components right through the cell. In addition to the planned in-house production, Volkswagen expects enormous cost benefits with the rollout of the new unified cell which is prismatic instead of the currently used pouch- and cylindrical-style design. The unified cell is set to be launched in 2023 and will be installed in up to 80 percent of all EVs in the Group in 2030.

"This one-size-fits-all cell design will radically reduce costs of battery by up to 50 percent," said Herbert Diess, CEO - Volkswagen AG. 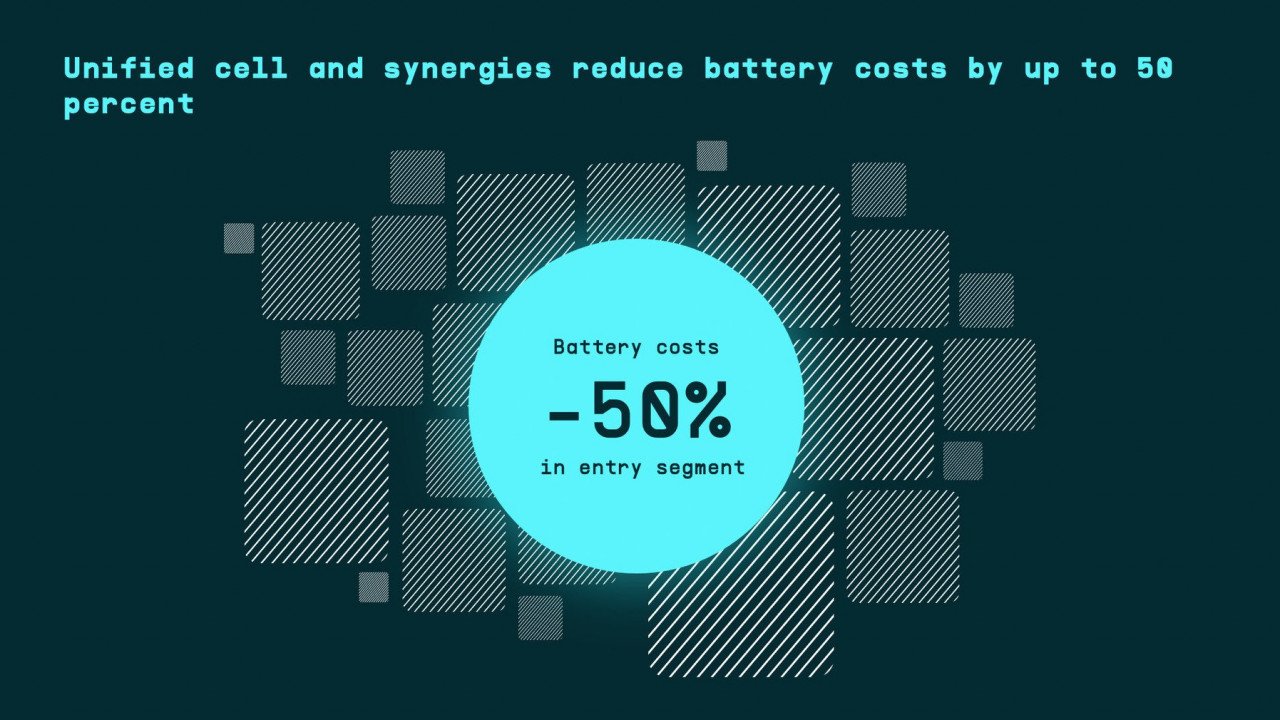 Volkswagen Group plans to reduce battery costs by 50% in entry segments in the next few years.

"On average, we will drive down the cost of battery systems to significantly below €100 per kWh. This will finally make e-mobility affordable and the dominant drive technology," said Thomas Schmall, Volkswagen Group Board Member for Technology and CEO of Volkswagen Group Component.

Reports suggest Volkswagen's shift to new unified cell prismatic batteries and plan to install a bulk of its EVs to a different battery cell design in the next two years has come as a bit of a shock to LG Energy Solution and SK Innovation – the two South Korean battery-giants which supply the Volkswagen with its current technology. Both the battery-providers are known to have invested heavily in pouch production sites in the United States, Europe, and Asia.

Volkswagen also shared its plans to secure the supply of battery cells beyond 2025.

To achieve this, the company plans to establish six giga factories that will produce cells with a total energy value of 240GWh (40GWh each), some of these giga factories will be set by Volkswagen, while others in collaboration with partners from across Europe. 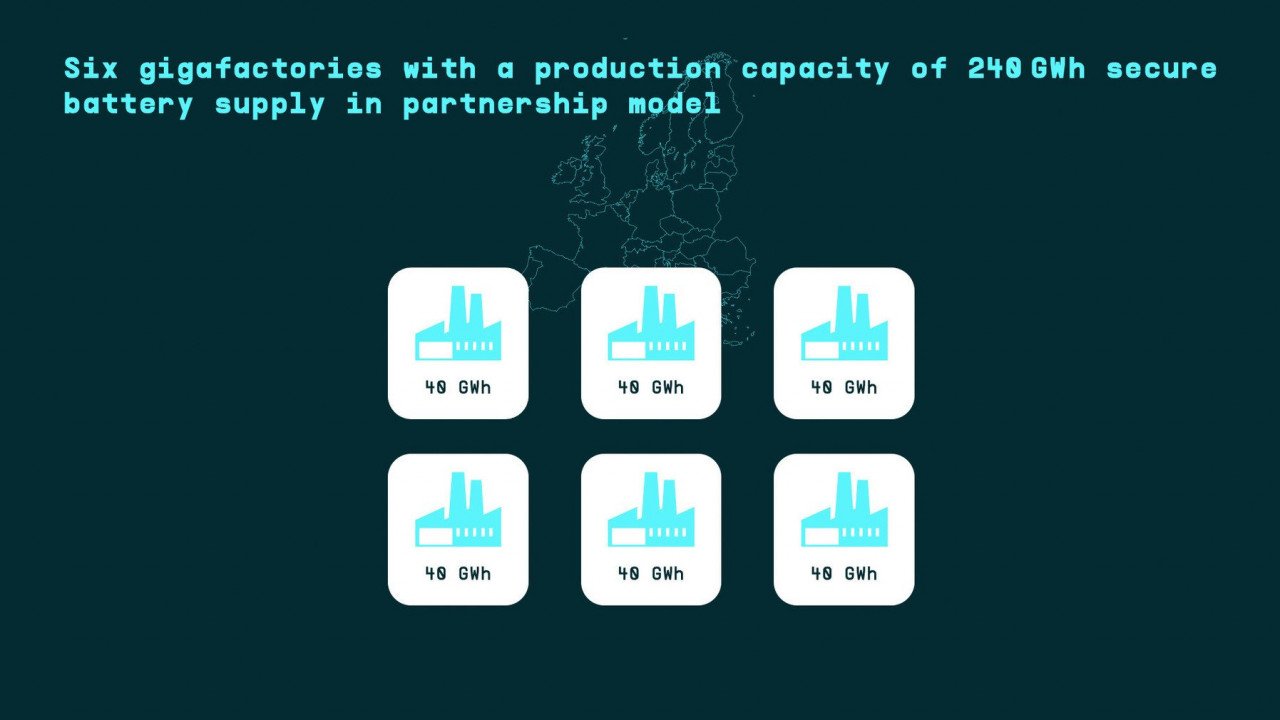 As the battery cell production substantially increases from these factories, it will gradually reduce the cost of batteries.

The production of the cells will be concentrated at the Swedish 'Northvolt Ett' giga factory in Skellefteå, and the giga factory in Salzgitter (operated by Volkswagen) to produce the unified cell for the volume segment from 2025.

Beyond batteries, Volkswagen will be expanding the global public fast-charging network five times of what it is today to correspond to a third of the total demand predicted in Europe for 2025. It intends to operate about 18,000 public fast-charging points on the continent by 2025 with its partners. 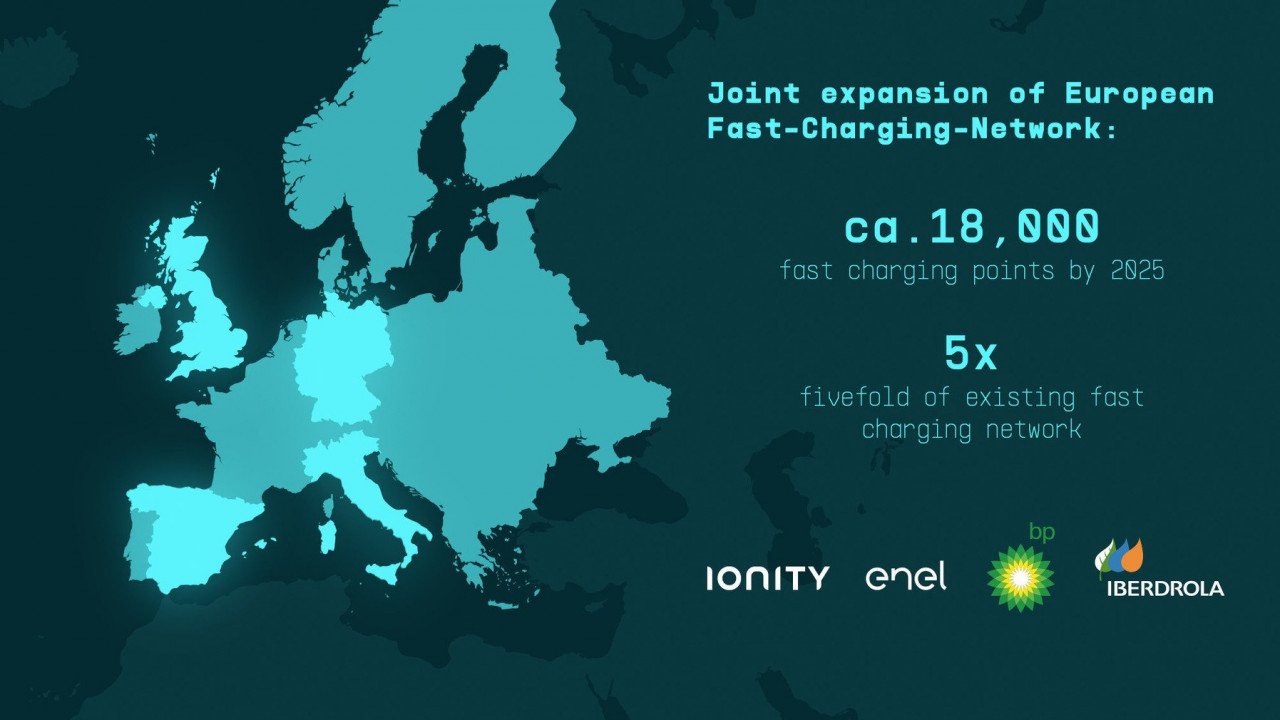 "We will make charging as easy as fuelling by strengthening our charging network in Europe, the US and China," Diess said.

The Group signed a series of strategic partnerships in addition to the joint venture with IONITY.

Volkswagen wants to establish about 8,000 fast-charging points throughout Europe together with BP. The fast-chargers with a charging capacity of 150 kW will be installed at a total of 4,000 BP and ARAL service stations, with the majority of these in Germany and Great Britain. In cooperation with Iberdrola, SEAT S.A., Volkswagen will cover the main traffic routes in Spain.

The three partners estimate, considering the expected evolution of the EV fleet in Spain, the roll-out of a network of around 350,000 urban and interurban public charging points will be needed by 2030. Iberdrola is developing a public charging infrastructure plan that will ensure enough charging points, including fast and ultra-fast charging (HPC), to serve the country's main corridors and cities.

In Italy, Volkswagen will collaborate with Enel to establish the fast-charging network both along motorways and in urban areas. Volkswagen will invest about €400 million in the European programme by 2025, with further investments being borne by external partners.

With the intention of making e-car part of the energy system, Volkswagen will be combining e-mobility and energy for further efficient use. The idea is to allow green energy from the solar energy system to be stored in the EVs and fed back into the home network thereby making EVs an integral part of future energy systems. 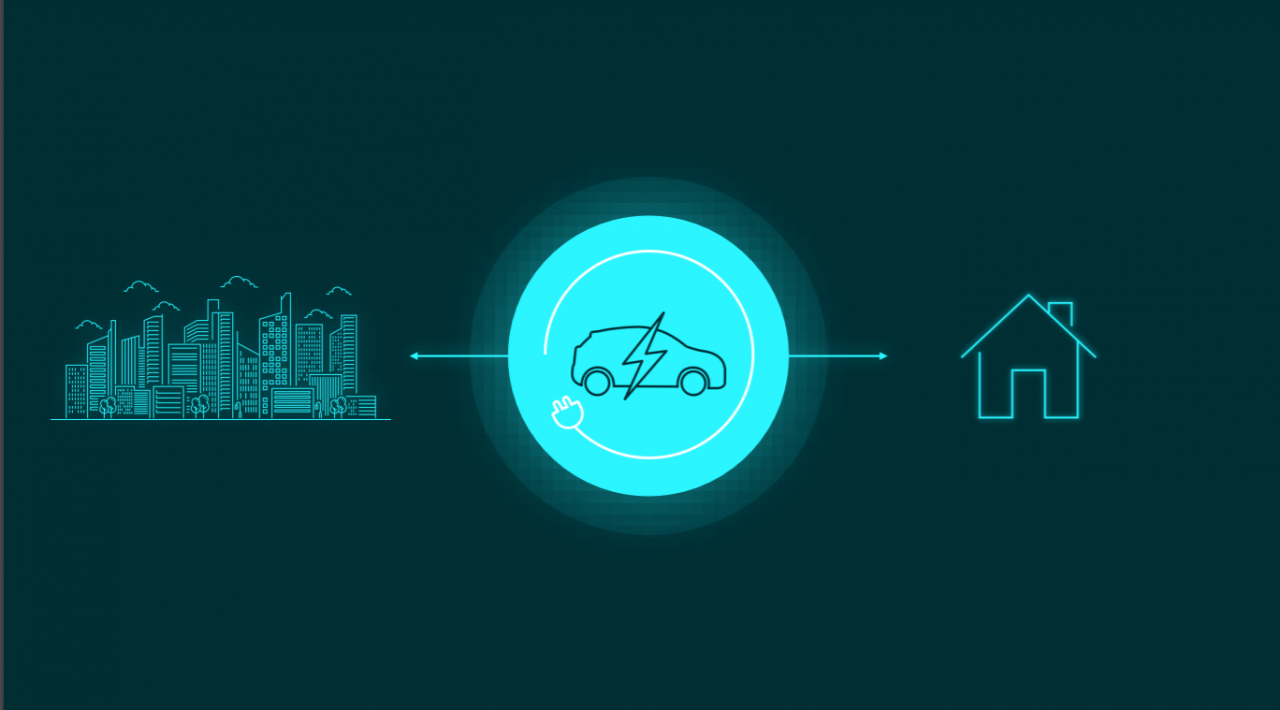 The company will roll out new technology from 2022, called bi-directional charging.

Once this platform is rolled out, all vehicle models built on Volkswagen's modular electric drive matrix (MEB) will be able to store excess energy, for instance, from the home's solar panel which can then be transferred back to the home network or other buildings when needed.

Volkswagen will also offer a complete package with all modules and digital services – from the bidirectional wall box to energy management. The technology will be soon available for wider applications such as residential buildings, businesses, or in the general power grid.

The technical and economic backbone of Volkswagen's electric mobility strategy is the modular electric drive matrix (MEB). This vehicle architecture designed especially for the electric drive systems offers long-range, greater interior space, and higher performance. The compact ID.3 was introduced in the market as the first MEB-based electric car, followed by the first purely electric SUV from Volkswagen, in the form of the ID.4. Other members of the ID. the family is scheduled for release.

The Group's focus has also been on integrating more steps along the value chain all the way to industrial recycling.

The idea is to secure a long-term supply of cells and materials through strategic partnerships. 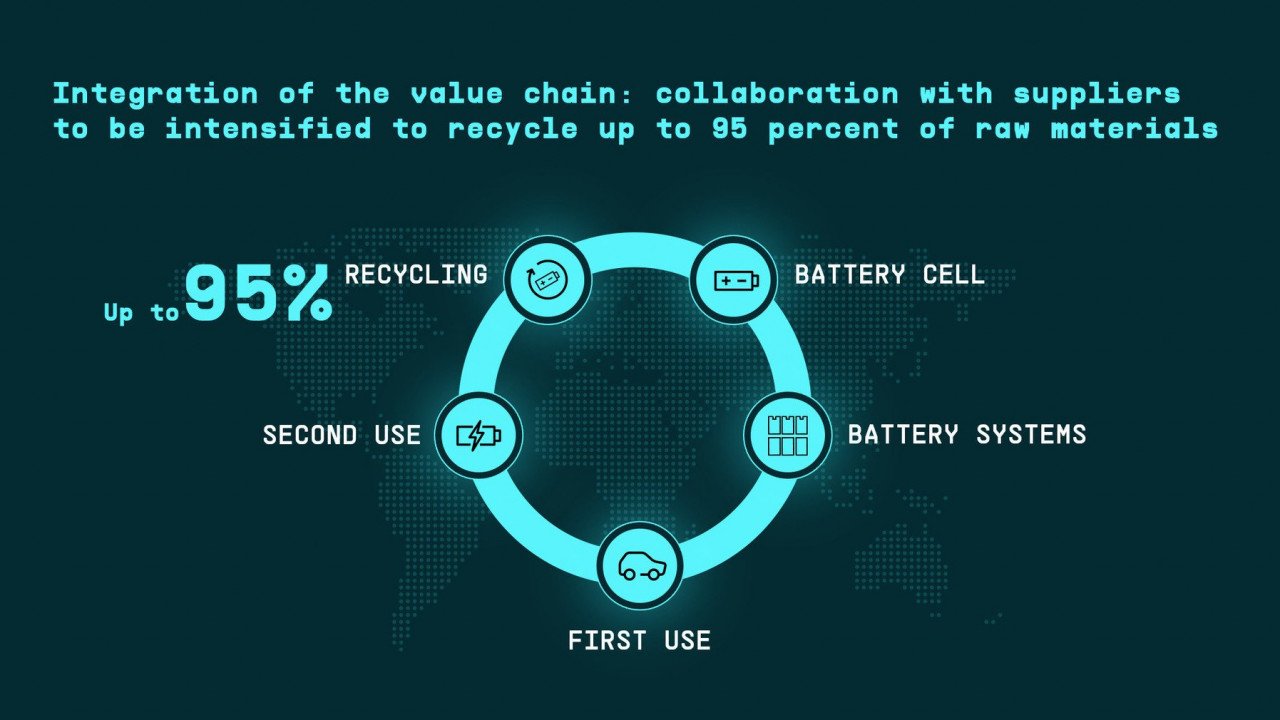 Volkswagen will focus on the entire value chain of the EV battery as sustainable as possible. Source: Volkswagen AG.
Volkswagen intends to invest a total of €35 billion in expanding electric mobility by 2025. The Group brands delivered 231,600 EVs in 2020 – three times the figures in 2019. Source: Volkswagen.

In February this year, Volkswagen Group Components opened its first battery recycling plant to ensure sustainable end-to-end responsibility for the entire value chain of the EV battery. The recycling plant in Salzgitter, Germany will help recover valuable raw materials such as lithium, nickel, manganese, and cobalt in a closed-loop together with aluminum, copper, and plastics, achieving a recycling rate of more than 90 percent over the long term.

The plant has been designed to initially recycle capacity up to 3,600 battery systems per year in its pilot phase – and it will be gradually scaled up to handle larger quantities.

At present, the one winning factor that Volkswagen has, and Tesla does not, is scale. The iconic German automaker with its several brands and extensive market presence is in a unique position to enable faster transition to e-mobility.

Volkswagen aims to surpass Tesla's EV sales by 2025, and they very well could -- some analysts contend that day might arrive sooner than anticipated.

In a recent development, next-gen li-ion battery startup QuantumScape met the technical milestone set forth by Volkswagen to secure an additional $100 m from Volkswagen for solid-state batteries.

The technical milestone set by Volkswagen required it to successfully test the latest generation of QuantumScape's solid-state lithium-metal cells in their labs in Germany.

QuantumScape's co-founder and CEO, Jagdeep Singh said: "We are delighted to have met this technical milestone with Volkswagen, and we look forward to working jointly to bring solid-state lithium-metal battery technology into industrialized mass-production."

This will be the second and final closing under May 14, 2020, stock purchase agreement between VW and QuantumScape that provided for a total $200 million investment.

Volkswagen is looking to now receiving and testing subsequent generations of cells, with the goal of getting solid-state technology into series production.