Jan-Feb 2020
Linkedin Twitter Email WhatsApp Facebook
Renewable energy that was treated as a tax saving measure in 2010 and not as a viable power option, is sending conventional generators back to their white boards.

while you are reading this, other future dwellers are frustrated by the offerings that your industry is providing them, and they, too, are involved in subversive activities, in an effort to push your own industry a bit further into a more acceptable future. If only you could find them, then you too would have an edge into the next level of competition

On reflection one observes that the world today is in fact telling us the same truth, loudly and clearly. If you don't change the traditional way of doing business, you will no longer remain a leader. The Indian energy sector story is a significant example of this. Let us have a look at the scenario of the Indian power sector.

Looking back at the Indian power generation mix of 2010, renewables, which had a 10 percent share then, today stands at 24 percent. By the end of 2020, renewables are expected to cross the 100 GW mark.
Shows the trend of different fuel source capacities over the decade. The growth of renewables deserves a special mention here, as it saw rapid capacity increase. Conventional sources, which enjoyed a six percent growth rate YOY at the beginning of the decade, reduced to three percent (the overall increase through the decade being 1.2 percent). A detailed YOY growth trajectory of various fuel sources is well-explained in Figure 3, with the red line showing the overall annual growth along the decade.

In 2010, India was still importing around 10 percent of power from Bhutan; today that is no longer a requirement. When the decade started, India had an energy deficit of 10 percent and a peak deficit of 12 percent; today the numbers are 0.5 percent and 0.7 percent respectively. The reserve margin or backup in the grid has also
been increasing, standing at
55 percent today.
The overall energy surplus and dominance of renewable growth has also resulted in the thermal plant load factor falling from 70 percent at mid-decade to 56 percent as on November 2019. This has primarily happened due to the rapid drop in solar and wind tariffs and the implementation of must-run status. With the exclusion of feed in tariff and inclusion of competitive bidding for renewables, the sector saw a huge decline in per unit electricity cost.
In 2011 solar tariffs were as high as `17.91/kWh, today it has fallen to `2.85/kWh, which is actually a slightly higher tariff than the lowest recorded tariff of `2.44/kWh in 2017 (86 percent decrease). Wind also saw a moderate decrease in tariffs at the beginning of the decade: when FiT was in place, wind tariffs ranged between `4 to 5 /kWh; today they have dropped to `2.87/kWh. Realizing the importance of renewables and in accordance to its commitment to the Paris Agreement in 2015, our government has set an ambitious target of 175 GW by 2022. Prior to that the Jawaharlal Nehru National Solar Mission scheme (JNNSM) was set-up in 2010 to encourage solar adoption, both on and off grid.
Policies like Green Corridor, Must-Run status and for some States, relaxation from T&D charges encouraged more RE installation in the grid, which saw peaks in 2016-17 with a total of 14.4 GW installed in a single year. 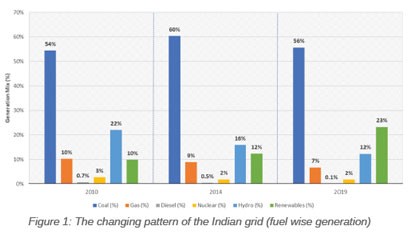 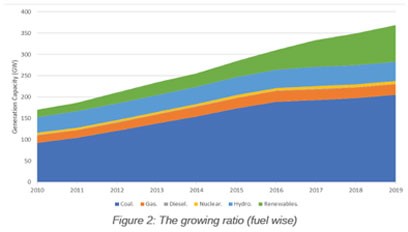 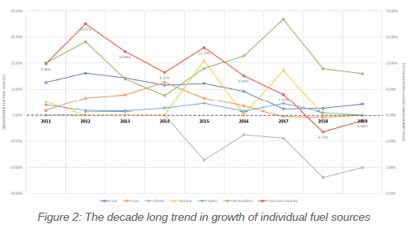 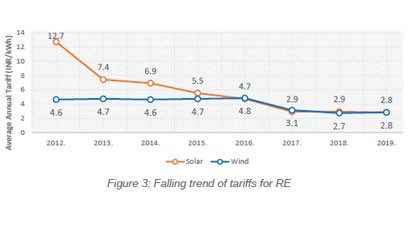 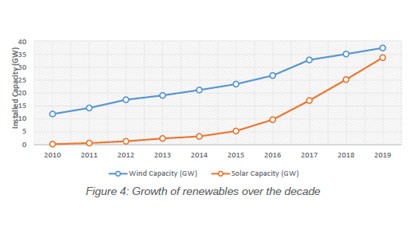 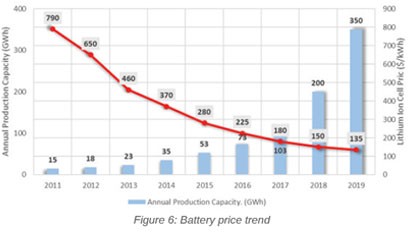 Wind and solar have witnessed a lot of technological improvements over the decade: from efficiency improvements to better technology, the RE industry has been constantly updating itself. Over time, in order to cater to renewable power, the Discoms have had to curtail conventional generators. This is reflected in the reduced utilization of conventional power plants from 78 percent (2009) to 60 percent (2018). Around the same time India faced scarcity of domestic gas. Depletion of supply of the KG basin and other gas sources like CAIRN, forced gas IPPs to buy imported gas which raised the per unit cost of power generation. Over time, their utilization factors have seen a sharp decline, which led to many such stations being either run as peaking plants today or being completely shut down. Coal supply and demand has also been an issue with coal allocation to new plants not matching demands.

Amidst all these, while renewables have been penetrating into the grid and slowly conventional power sources are making way for the same, the grid has also increased in its variability and slow reduction of inertia that was provided by the reliable conventional sources.
Today, India boasts of 34 GW of solar of which around 31 GW is ground mounted. That means considering an average capacity factor of 20 percent in good solar months, we are talking of around 7 GWh of energy. While this sounds very motivating, also brings a unique challenge. At around 6pm in the evening and in the morning when the energy demand actually peaks, solar generation plummets. Thus, there is requirement of a buffer that can accommodate this deficit. 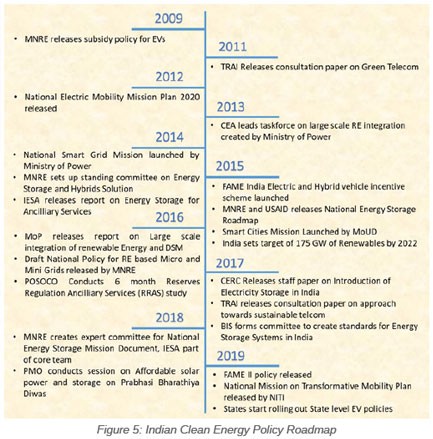 Energy Storage has been one section in the energy value chain, which got increasing prominence along with renewables in this decade. The industry realized that with the decentralization of power sector and increasing ingress of renewables, there is a necessity of a buffer in the grid in order to attain energy security. At the beginning of the decade storage was seen as a good-to-have option, but considered futuristic due to its high cost.
Work on this area slowly started with Ministry of Power organizing a taskforce on renewable integration in 2013.
MNRE initiated a working group to discuss storage, microgrids and renewable integration. In 2014, MNRE formed a standing committee on energy usage and hybrids, which also included discussions on storage potential. By 2017, BIS initiated a committee to create standards on energy storage in India – and 2018 saw MNRE create an expert committee to work on the formation of a National Energy Storage Mission Document. 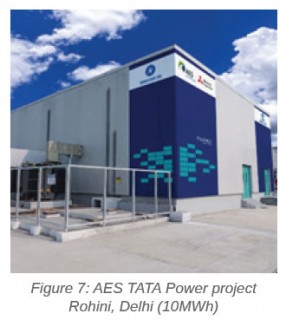 The cost of storage has fallen by 85 percent over time; what started off at more than a $1000 /kWh in 2010, is today in the range of $150-170 /kWh. What allowed for this exponential price decrease is the rapid technological improvement in storage. Battery chemistries themselves saw massive improvements.
Installation wise, India had its first grid level storage deployment by AES at the TATA Power Rohini Sub-Station in Delhi. The project executed by Fluence, marked the first storage project of 10 MWh. Over the last two years, SECI took the lead to release many tenders targeted towards stationary deployment of batteries.
In 2019 alone, 28 tenders released. Today, India has around 14 MWh of storage projects deployed, with many more in the pipeline. NITI Aayog has been working on the giga factory plan to set-up indigenous battery manufacturing in India. The plan projects a 50 GWh potential
by 2025 for storage manufacturing in India. 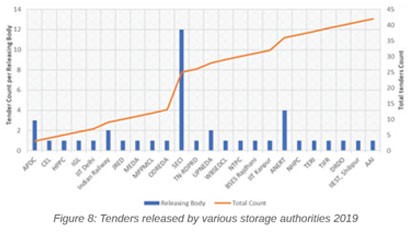 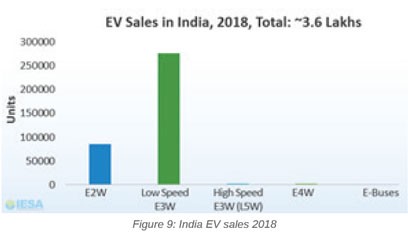 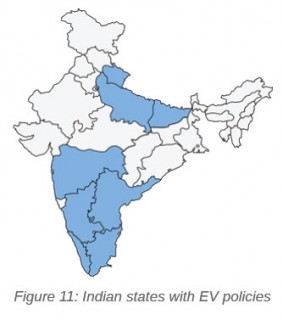 One area where battery deployment received a major push is in vehicle electrification. India has been susceptible to the dynamics of petrol/ diesel prices as well as a rising pollution concern across many cities, most prominently in Delhi.

In India, the first electric movers came in forms of rickshaws, which anyways make up the maximum of the auto-motive market. E-buses, though less in number as on date, are being seen increasingly on Indian roads.
The Indian government is also promoting the vision of 25 percent of all new vehicles as EV by 2030. It has introduced a GST reduction for batteries being used in EVs and the tax incentives on purchase of EVs have been welcome steps. The launch for FAME-I in 2015 and FAME-II in 2019 has increased investor interest. FAME-II outlays a budget of `10,000 crore phased over 2019 to 2022, with a key objective to electrify public and shared transport. A total of 10 lakh e-2W, five lakh e-3W, 35,000 e-4W, 20,000 e-4W (strong hybrid) and 7090 e-buses will be a part of this program.
The focus is also to promote domestic production so that India becomes a manufacturing hub and remains self-reliant going forward. The government has made charging of EVs a de-licensed activity which means that anyone can go ahead and install an EV charger. These steps have been ably backed up with many state governments coming up with their own EV policies and charging tariffs.
India Energy Storage Alliance projects that the market can grow at a CAGR of 36 percent between 2018 and 2026. Market growth is projected to increase pace after 2023-24 when cost parity is expected between an ICE and an EV.
Though there are complaints about the speed of transition and policies often being delayed and non-confirmative, the point to appreciate here is that the transition has come a long way.
One technology, which also started getting prominence towards the end of the decade, is Hydrogen. Who knows, hydrogen might have its own market share in the transportation sector in the next decade! 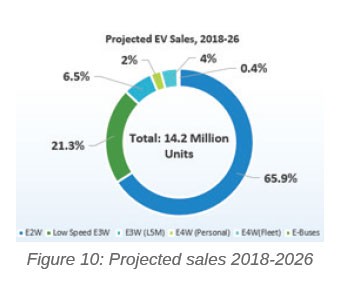 So, overall this decade will always be remembered as a decade in which the energy sector truly transformed. It changed many myths and misconceptions and also made even the toughest critic of change realize the importance of change. Yes, there have been hiccups, there has been investor issues due to lack of policy clarities and indecisiveness of government commitments; 2019 specially has been a dampener where renewables saw a decline in installation and growth, but overall this decade has been an eye opener and has set up the stage for a very promising decade that is knocking at our door.