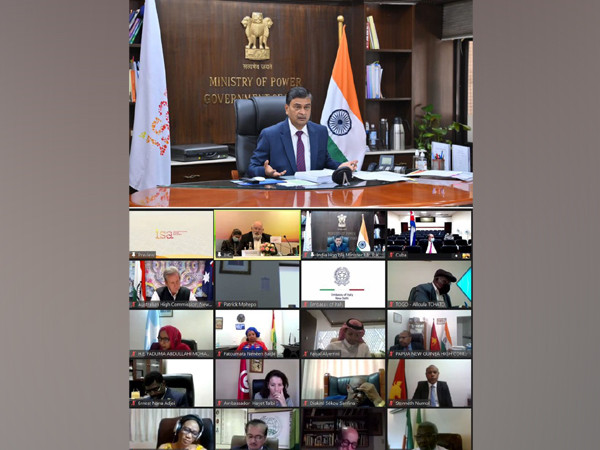 The fourth general assembly of the International Solar Alliance (ISA) was held virtually between October 18th and October 21st, 2021. It was presided by Union Minister Mr. R.K. Singh, Minister for Power, New and Renewable Energy, Government of India, and the President of the ISA Assembly. A total of 108 countries participated in the Assembly, including 74 Member Countries and 34 Observer & Prospective Countries, 23 Partner Organizations and 33 Special Invitee Organisations also participated. U.S. Special Presidential Envoy for Climate, John Kerry delivered the keynote address, and the European Commission Executive Vice President for the European Green Deal, Frans Timmermans, addressed the gathering on October 20th.

Delivering the presidential address, Mr. RK Singh, Minister of Power & Minister of New and Renewable Energy, India, said, that it is time for all of us to get together to make energy access using solar and renewable energy available. We have successfully done this in India, and it can be replicated globally. Solving the problem of energy access is more important than the energy transition. The energy transition is meaningless for those without energy. The ISA can enable energy access for 800 million people worldwide. He emphasized that it is time for developed countries to direct the energy transitions funds they had committed at previous climate conferences. ISA will cover credit guarantees and help in driving green energy investments in these countries. Developed nations must decide whether economic development should take place through clean energy, or by burning coal and firewood, Mr. Singh said.

Dr. Ajay Mathur, Director General, the ISA said, "Solar will catalyze the world's transition to a lower-carbon economy, being the lowest cost and most economical solution for increasing power generation capacity in countries. It also has the potential to help lift no less than a billion people out of energy poverty, but only if adequate investments are mobilized and the right policy frameworks are erected. ISA targets $1 trillion of investment in solar by 2030, which would be significant in bringing the world closer to energy transitions needed."

French Minister of Ecological Transition and Co-President at the ISA Assembly, Ms. Barbara Pompili said, "This is an important year for all of us to access modern and sustainable energy. The ideas shared in the first energy summit convened by UN General Assembly are also our priorities in the International Solar Alliance. Closing the energy access gap by 2030, decarbonizing energy systems by increasing solar and wind power capacity, and mobilizing large-scale financing and technological dissemination in renewable energy are key objectives. At COP26, we are working hard to ensure no one is left behind. Thus, international cooperation is at the heart of the conference."

Mr. George Freeman, Member of Parliament; Minister for Science, Technology & Innovation for The United Kingdom, said, "The UK has made clean power transition a top priority. The main challenge is the transition to green power, figuring out how to build and operate electricity grids, and meeting our global power needs sustainably, affordably, and reliably. To meet these challenges, we need new transmission lines coordinated with mini-grids and off-grid energy access solutions, supported by modern power systems. The IEA has made it clear that without global cooperation, the clean transition could be delayed by decades; decades we don't have. Under the Modi-Johnson leadership, UK and India will together bring the 'Green Girds Initiative' and 'One Sun, One World, One Grid' at COP26. This is aimed at mobilizing the global technical, financial, and research cooperation because it is only by working together that we will deliver the scale and pace of the clean power transition aim."

U.S. Special Presidential Envoy for Climate John Kerry, said, "Solar energy is the most powerful tool that the world has in its toolkit to combat the climate crisis. Building a solar-powered economy won't just slash carbon emissions, it'll open enormous economic opportunities. The ISA is unique in its focus on spreading solar to emerging economies including small island states. So, I commend the tremendous work that every country here is doing as part of the International Solar Alliance. Solar energy is critical to our collective climate goals."

Highlighting the important milestones achieved by the ISA since its launch in Paris in 2015, H.E. Frans Timmermans, The European Commission Executive Vice President for the European Green Deal, said "Developing renewable energy will be the engine for our global recovery from the COVID crisis and to keep energy prices in check. It is fast becoming the most cost-effective option to generate electricity and address the needs of a rapidly growing population. Clean and efficient energy investments create new markets, offer new business opportunities, and provide good numbers of local skilled jobs. It is more than climate action. Today it is simply smart business."

Speaking at Enhancing the Capacity of Women to Support Energy Transition session, Mr. Indu Shekhar Chaturvedi, Secretary, The Ministry of New & Renewable Energy shared, "to increase the participation of women in the #RE sector, the private sector has to contribute in a big way. Capacity is essential for ensuring employability. Going ahead the ministry will focus more on women in our skill and capacity-building programs. We are working on the concept of Decentralised RE applications & propose to turn it into a scheme in the coming months, to enable women to use things such as solar dryers and solar grinders, etc. and improve women's lives and enable them to earn a livelihood.

During the assembly, two new programmes were launched: Management of Solar PV panels & battery usage waste & Solar Hydrogen programme. The new Hydrogen initiative is aimed at enabling the use of solar electricity to produce hydrogen at a more affordable rate than what is available currently (USD 5 per KG), by bringing it down to USD 2 per KG. Making hydrogen cost-competitive with natural gas presents major challenges for both supply and performance. However, bringing down the costs can unlock a cascade of benefits. The discussions at the Assembly highlighted that the MSME clusters can replace diesel gensets with hydrogen, which are viable even at today's solar hydrogen prices. The discussions also focused on how ISA's waste management programme will be pivotal for the growing volume of waste & toxic materials, lack of waste-specific legislation, and high cost of waste treatment.

An update on the One Sun One World One Grid (OSOWOG) initiative was also discussed at the Assembly. The concept of a single global grid for solar was first outlined at the First Assembly of the ISA in late 2018. It envisions building and scaling inter-regional energy grids to share solar energy across the globe, leveraging the differences of time zones, seasons, resources, and prices between countries and regions. OSOWOG will also help decarbonize energy production, which is today the largest source of global greenhouse gas emissions. Aiming to synergize its efforts and actions with other similar initiatives globally, OSOWOG has joined hands with GGI to form a unified GGI-OSOWOG initiative, which aims to contribute to the collaborative, rapid development of resilient grids globally – building on continental, regional, and national grid infrastructure programs.

The UK COP Presidency, the Government of India, and the Presidency of the ISA are expected to announce this collaboration at COP26, to facilitate increased technical, financial, and research cooperation to help deliver the joint vision of the two initiatives. This collaboration will be another leap towards a global ecosystem of interconnected renewables shared for mutual benefits and global sustainability and collectively become one of the most resilient steps to mitigate Climate change and support the global energy transition.

The International Solar Alliance (ISA) also announced a partnership with Bloomberg Philanthropies to mobilize $1 trillion in global investments for solar energy across ISA's member countries. The two organizations will work with World Resources Institute (WRI) to develop a Solar Investment Action Agenda and a Solar Investment Roadmap, which will be launched at COP26.