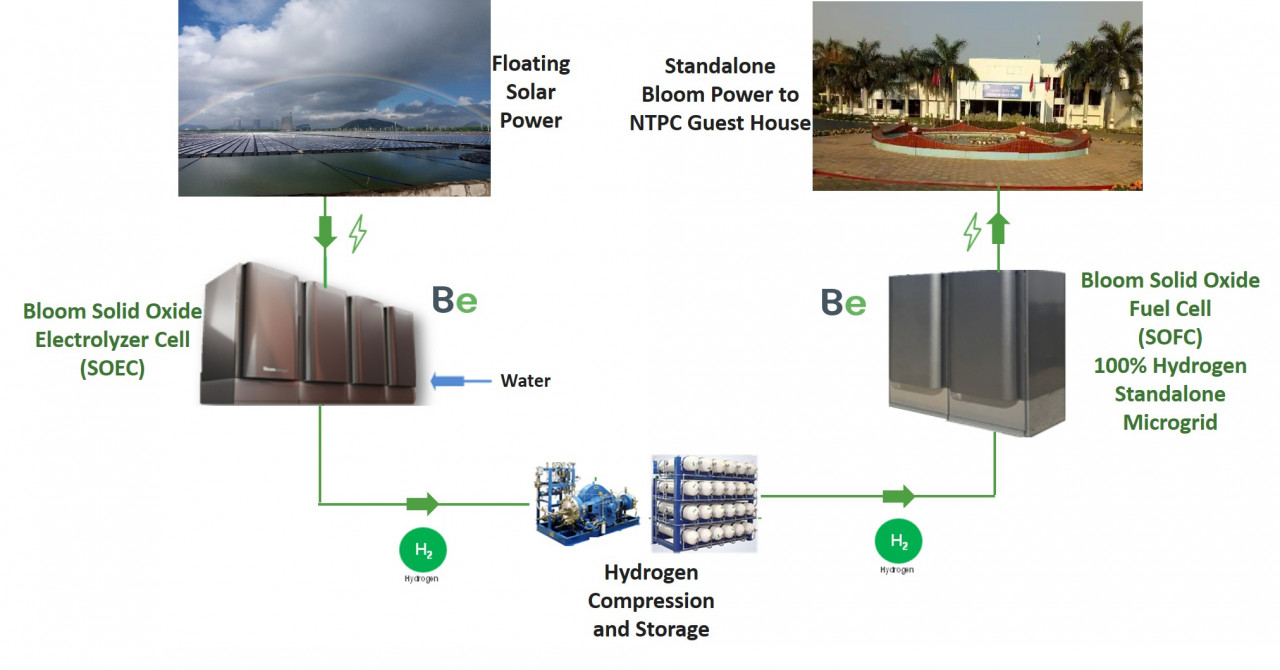 As part of India's pledge to reach carbon neutrality by 2070, the project is designed to delve into large-scale, off-grid hydrogen energy storage and microgrid projects at strategic locations throughout the country.

Bloom Energy (India) Private Limited, a wholly-owned subsidiary of Bloom Energy, was chosen for its all-inclusive, comprehensive, and efficient technology ecosystem spanning green hydrogen production and carbon-free power. The initial cooperation between NTPC and Bloom Energy India is projected to serve as a foundation for expanded future cooperation.

The association will utilize Bloom Energy's solid oxide, high-temperature electrolyzer to generate green hydrogen from renewable electricity produced by a nearby floating solar farm. The hydrogen will then be converted into carbon-neutral electricity without combustion through Bloom Energy's hydrogen fuel cells to power NTPC's Guest House, a local accommodation intended for use by NTPC employees and guests. The project is expected to begin in 2022 in Simhadri, Visakhapatnam, India.

The solar farm coupled with Bloom Energy's electrolyzer and hydrogen fuel cells is expected to operate around the clock. At scale, the combination could facilitate long-duration clean energy storage and resilient power for businesses, residential neighborhoods, dense urban areas, and remote and island communities.

India is pursuing aggressive plans to move towards renewable energy and storage capacity while ensuring grid stabilization for its citizens. Hydrogen is a natural complement to renewable sources of energy, leveraging excess peak power created during the day for conversion into hydrogen to provide pollution-free, reliable power that provides long-duration storage.

"Reducing carbon emissions is the number one priority in the fight against climate change, and green hydrogen will be critical to India's decarbonization objectives," stated Venkat Venkataraman, executive vice president, and chief technology officer, Bloom Energy.

"Bloom's technology is well-positioned to help India transition to a net-zero, hydrogen-powered economy, and we are excited to collaborate with NTPC to bring the country's first green hydrogen microgrid to life. The powerful combination of Bloom's high-efficiency electrolyzers and fuel cells enables the highest possible round-trip efficiency with green hydrogen for energy storage."