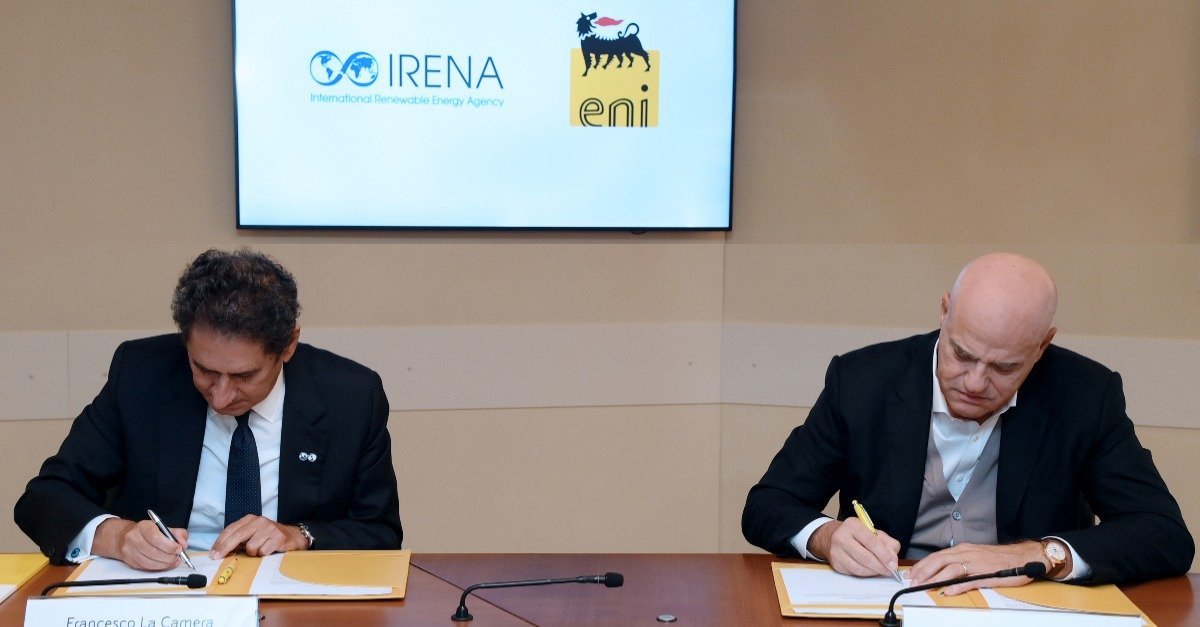 Eni and the International Renewable Energy Agency (IRENA) have announced that they have entered into a three-year partnership agreement to cooperate in the promotion of renewable energy and accelerate the energy transition, particularly in countries that export fossil fuels.

The agreement has been signed by Eni's Chief Executive Officer, Claudio Descalzi, and IRENA's General Director, Francesco La Camera, at a time when Milan is hosting the "Pre-COP 26" preparatory ministerial meeting.

Under the terms of the agreement, Eni and IRENA will work together to foster dialogue and share their experiences on accelerating energy transition and renewable energy development in fossil fuel exporting countries, as well as to identify barriers to private sector investment in renewable energy in countries where Eni operates and promote solutions in coordination with governments.

Eni and IRENA will promote the integration of the African continent into the biofuel value chain through institutional capacity building, agribusiness, and industrial development initiatives aimed at the production of advanced biofuels, helping the decarbonization of the transport sector and promoting development opportunities.

The partnership builds upon Eni's commitment to contribute to the decarbonization of African countries' energy mix, leveraging renewable energy sources to reduce the use of fossil fuels in power generation. Also, it represents an opportunity for Eni to strengthen the dialogue with IRENA, share its expertise and portfolio of technology solutions, enhance its international role as a leader in the energy transition, and actively contribute to the institutional debate on energy policies that the agency promotes.

IRENA's General Director, Francesco La Camera, stated: "We have reached a critical moment in the energy transition, one that requires the commitment and active participation of energy actors from across the spectrum. It is in the interests of big oil companies and fossil fuel exporting nations to embrace the transition and seek a leadership position in it. The partnership between Eni and IRENA will reinforce our common efforts to advance the low-carbon agenda in the decade of action."

Eni's Chief Executive Officer, Claudio Descalzi, said: "The agreement with IRENA is a step forward Eni's pledge to reach net-zero by 2050, as it leverages renewables and other technological and industrial solutions to successfully face the energy transition. We have designed Eni's evolution in the coming years by combining the objectives of continuous development in a rapidly evolving energy market with a significant reduction in the carbon footprint of our portfolio. Today's alliance can boost this process, just as we will be able to make our contribution in terms of know-how and commitment."