Kerry Segrave's 'The Electric Car in America, 1890-1922', presents a vivid account of the EV evolution in pre-war America, and the socio-cultural responses it elicited back in the days. 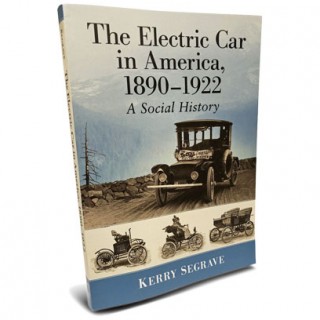 In the book, cultural historian Kerry Segrave takes us to an era when the EV was just introduced in America. He provides a glowing socio-historical account and cultural interpretations of the generation with the introduction of the new electric mode of transportation. The book examines different information published in the newspaper and magazines related to different type of EVs and gasoline vehicles. It provides rich details about EVs and the public perspective on the newly launched vehicles.
The author traces the introduction of EVs, steam engine vehicles, and gasoline-based vehicles through time and how it changed human societies. Chronological documentation of the American automotive industry gives the reader an idea about the thriving new technology, socio-economic scenario, and people's view.
The clean, combustion-free, noiseless and mechanically simple electric car seemed poised in 1900, and was believed to be a game-changer in the automotive industry. People liked the idea that an electric car could be started instantly from the driver's seat and that provided an added advantage over other manually cranked machines.
The book takes the reader on a journey of the EV: Pre-1895, 1895-1900, electrics show great promise, 1901-1913, gasoline cars advance, electrics stagnate, 1914-1922, end times for electrics. The book encompasses in-depth research on EVs and serves as a repository of articles and texts, and skilfully documents different advertisements and photographs published at that time.
The hope and confidence in EVs seemed to die-down in the early 1900s and subsequently, just two decades later, electric cars were effectively dead. As per the details provided by the book, EVs remained expensive whereas dramatic price reduction took place for gasoline cars. One of the major problems associated with EVs was the battery storage technology. The author refers to a quote published in a publication then - "The fact that most of the battery problems were never sorted out was the single most important factor that led to the death of the electric by 1920s."
Thomas Edison, popularly known as the 'Wizard of Menlo Park', failed despite several years of study on developing an improved EV battery. Although very few automakers continued EV production until late 1920s the EVs could not compete with the growing prominence of gasoline cars. According to one local battery expert in Texas in 1915, the vehicle owners had no idea of the long time it takes to recharge a battery. "Owner was usually in a hurry and wanted to get his battery back as quickly as possible, when as a matter of fact, he was required to leave it at the charging station for at least two days." If the battery man at the station gave in and let the owner take his machine after it had been charging 'only a few hours' it would seem to run all right at the beginning but would quickly go dead again. Author also mentioned that the electric car of 1922 has very low range - about 80 to 100 km on a single charge, which is one of the major reasons why EVs failed to take off.
The book also mentions the several annual automobile shows that were held in different cities across America, with description of the different products showcased at these events. But what was most interesting to read was about the advertising campaigns that pushed people to buy EVs. However, the increasingly frantic public relations campaign of lies and illusive advertising could not improve sales. In fact, it resulted in the wrong representation of EVs and hindered their large-scale production. The book also touches upon the pricing of the EVs and their performance, curated from various news articles published at that time. The price of electric cars was in the range of $2000 to $2500 in the year 1922. It is interesting to note that in those time s the electric cars were maintained for $40 per month, including pickup and delivery.
People's perception of automobiles in that era and its socio-cultural bearing, makes for intriguing reading. Many believed that the automobiles were specifically for the wealthy classes, and between 1901-1913, EV firmly came to be associated with women and was peddled as a 'women's car'.
Overall, the book provides an engrossing account of the birth of EVs in America, and makes for an enjoyable read for both, electric vehicle enthusiasts and experts. Understanding the EV's history and its social response in a bygone era, might help us apprehend the current EV scenario; not only have the times changed but also the need and social perception.