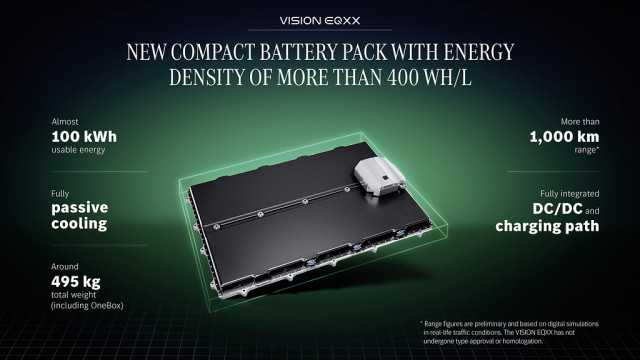 At the ongoing CES 2022 event, Mercedes-Benz unveiled its futuristic EV concept car – the Vision EQXX – demonstrating significant improvements in terms of battery energy density and overall energy efficiency. The car achieves a benchmark efficiency of 95 percent from the battery to wheels.

The carmaker claims a driving range of 1,000 kms (over 620 miles) on a single charge on real-world road conditions for the car, with its 100 kWh battery pack becoming 50 percent less in volume and 30 percent lighter in comparison to that of the EQS – the brand's flagship EV on sale today.

The battery pack of the Vision EQXX is jointly developed by Mercedes-Benz R&D and Mercedes AMG High-Performance Powertrains (HPP) team. It demonstrates a remarkable energy density of close to 400 Wh/l. "In effect, we fitted the energy of the EQS into the vehicle dimensions of a compact car," says Adam Allsopp, Advanced Technology Director from HPP.

"The battery has almost the same amount of energy but is half the size and 30 percent lighter. The battery management system and power electronics have been designed with an absolute focus on reducing losses. In achieving this efficiency milestone, we learned a lot that will flow into future development programmes."

The substantial increase in energy density comes partly from the battery's improved chemistry of the anodes. Their higher silicon content and advanced composition mean they can hold considerably more energy than commonly used anodes.

Another feature that contributed to the impressive energy density is the high level of integration in the battery pack, with the platform creating more room for cells and thereby reducing overall weight.

The separate compartment for the electrical and electronic (EE) components - the 'OneBox' - likewise made more room for cells. It also incorporates novel safety devices with energy-efficient operations that consume significantly less energy than the equivalent component in a production EV.

Several more aspects of the battery design add to its exceptional efficiency. For instance, its lid is light in weight, also made from sustainable composite material derived from sugar-cane waste, reinforced with carbon fibre.

The battery also features active cell balancing, which means drawing the energy evenly from the cells while the car is driving – in effect, giving it greater stamina. Overall, the battery weighs around 495 kilograms.