What is driving the EV market?

A look at the key push factors driving the development of the electric vehicle (EV) market and the wider implications of the expansion of this sector on charging and energy demand. Rho Motion, London-based research, and consultancy firm explore factors driving the EV market.

The starting point for all discussions around EV adoption, and the move towards a lower emission transport sector, begins with legislation. It then moves to OEM technology strategy, and finally to the consumer and the public acceptance of new technologies.
Over the previous two decades, legislators around the world have been developing ever more stringent standards for vehicle emissions placing increasing pressure on OEMs to adopt new technologies for their vehicles. The focus of these measures has been in two areas, ambient air quality, addressed initially by the European Commission (EC) through the Euro standards, and by the US Environmental Protection Agency (EPA) and the California Air Resource Board (CARB). These standards have subsequently been adopted and rolled out in most major economies under different names. 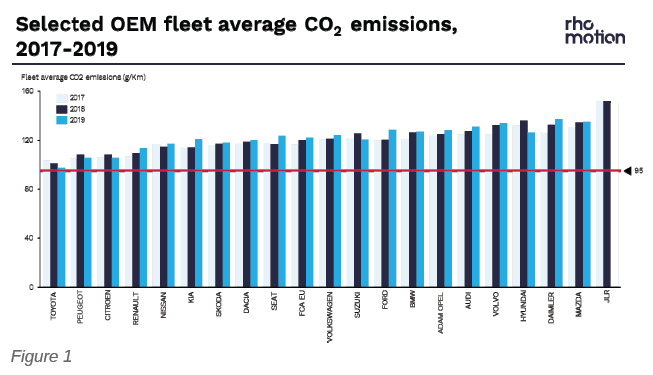 The second area of focus has been on CO2 emissions and the longer-term objective of addressing climate change, led largely by the EC. This year has seen the phasing in of new European CO2 emissions targets. The new target sets an OEM passenger car fleet average target of 95 gm CO2 per km, with a potential fine of €95 per gm of CO2 over the limit, multiplied by the OEM's European vehicle sales in a given year.
The target is fairly robust, especially when you consider OEM fleet average emissions in recent years. The first chart serves to illustrate this point, it shows CO2 fleet average emissions for a sample of major OEMs in 2017-2019, versus the 95 gm/km target. As can be seen, even at this relatively late stage, OEMs are no way near meeting targets with their existing model line-ups.
In fact, fleet average emissions have been rising, owing to a lower proportion of types of diesel sold, and larger vehicle sizes among model line ups. For OEMs with significant sales volumes in Europe, these fines could run to multiple billions of Euros. This goes some way to explain the rate of growth in sales of plug-in hybrid and battery EVs (PHEV & BEVs) in the region, both this year and in 2019.

This brings us to our second point, OEM technology strategy. As a result of these legislative measures, OEMs are left with little option but to continue to introduce PHEVs and BEVs into their model line ups and make significant investments in electrification, as they are in fact doing (see Figure 2). It is no surprise that the European market is a bright spot for the PHEV and BEV market so far in 2020. One thing to bear in mind, however, is the relatively large share of PHEV in the sales mix in Europe, 46 percent so far this year versus 24 percent in China. We expect that PHEVs will remain an important part of the model mix in the coming years.

The third point in all this is, will the consumers accept and buy the vehicles that OEMs offer. Key issues in the EV market in this regard have been the purchase price for vehicles, concern around the range, and the availability of charging infrastructure.
Price is being resolved by three trends in the sector. The first is around an ongoing improvement in battery technology and increasing energy density – this is also helping with the range issue. The second is that EVs are now being developed on their own platforms rather than being an extension of an existing internal combustion engine vehicle range. This results in better quality vehicles, and crucially allows the cost benefits of a much simpler powertrain, with far fewer components, to be exploited. The crucial part in all this, however, is scale. Battery cell costs have fallen dramatically in recent years due to the huge expansion in production, and the same process is just beginning at the vehicle level.
The issues around range and charging are also in the process of being resolved. Sales-weighted average BEV and PHEV ranges have doubled since 2012, from roughly 180 km to nearly 400 km, as average battery pack sizes have also doubled from under 20kWh to nearly 40kWh, as a result of better and cheaper battery technology. As it stands, however, charging infrastructure has failed to keep pace with the increase in EV sales, particularly in Europe (See Figure 3). This has not been a significant hindrance to the market yet, as much of the charging takes place at home. However, as the market grows this aspect needs to be addressed. This will require huge investments at the charging point level - we calculate in the region of $500 billion globally over the next decade, and also at the grid level for energy generation, storage, and transmission. The energy transition is happening, but it will require a huge financial commitment from multiple stakeholders along the entire supply chain, but as with all challenges, this also presents huge opportunities. 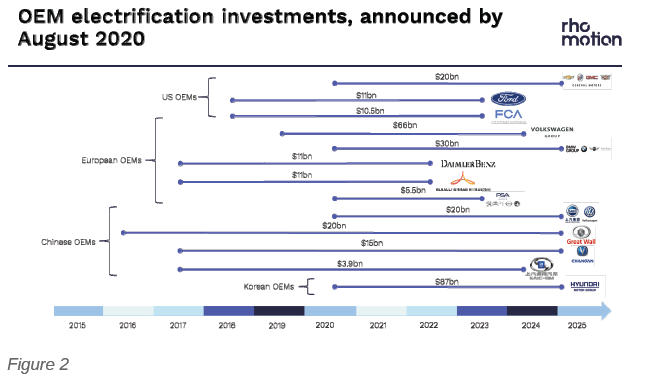 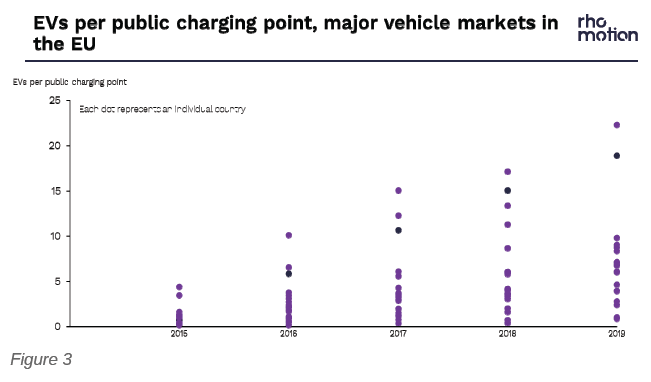 [Rho Motion is a research and consultancy house that provides market intelligence and research for EV and battery markets, EV charging infrastructure and electronic stationary storage for grid applications.]

arrow_back Visionaries of a brighter future
arrow_forward Classification of energy storage technologies: an ...