Green hydrogen is a key aspect of the energy transition, which also delivers incredible opportunities for the industry in the effort toward green power generation, innovation, and sustainability.

As demand for energy rises globally, there is a need to tap alternative energy sources that are greener, renewable, and abundant in supply. Hydrogen is one such source. Identifying the ability of this renewable resource, which can assist the world to achieve net-zero emissions and accomplish a circular economy.

The countries around the world are deploying resources and undertaking R&D programs to develop hydrogen as the next-gen fuel for ensuring sustainable power generation and supply.

In 2021, hydrogen development took center stage as the industry globally saw a spike in efforts with several countries with policies that precisely support investment in hydrogen technologies growing, along with the number of sectors they target. Several pilot projects are studying various applications for hydrogen use, and feasibility studies for its transportation are in progress. 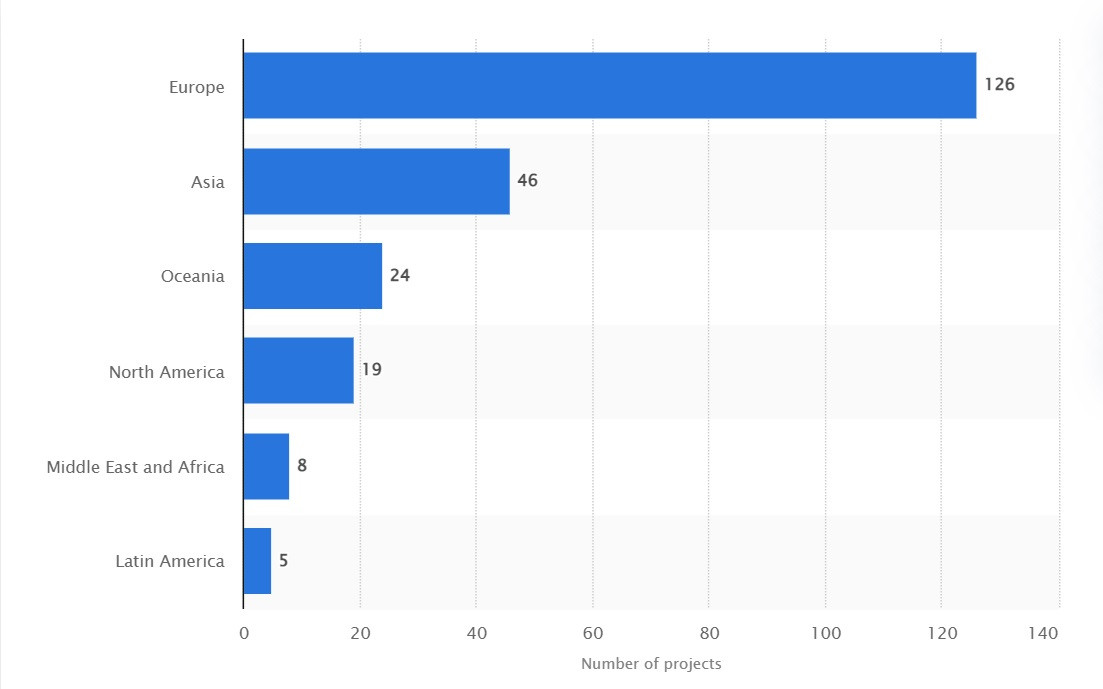 Many European countries have invested in finding non-carbon intensive alternatives for industrial and transportation usage, in line with the European Union's Green Deal and an effort to strengthen the local value chain.

As per the Hydrogen Council Hydrogen Insights 2021 report, Europe leads globally in the number of announced hydrogen projects, with Australia, Japan, Korea, China, and the USA following as additional hubs. Of all announced projects, 55 percent are in Europe. While Europe is home to 105 production projects, the announced projects cover the entire hydrogen value chain including midstream and downstream.

The industry body also believes that hydrogen could meet 18 percent of total global energy demand in the long term and create a €2 trillion market. But for the moment, the market is still in its early stages and needs a lot of policy support. As per Bloomberg New Energy Finance, as of July 2021, 43 countries have released or are about to release hydrogen roadmaps.

Some governments have announced big numbers, like Germany, Spain, France, and the United States. 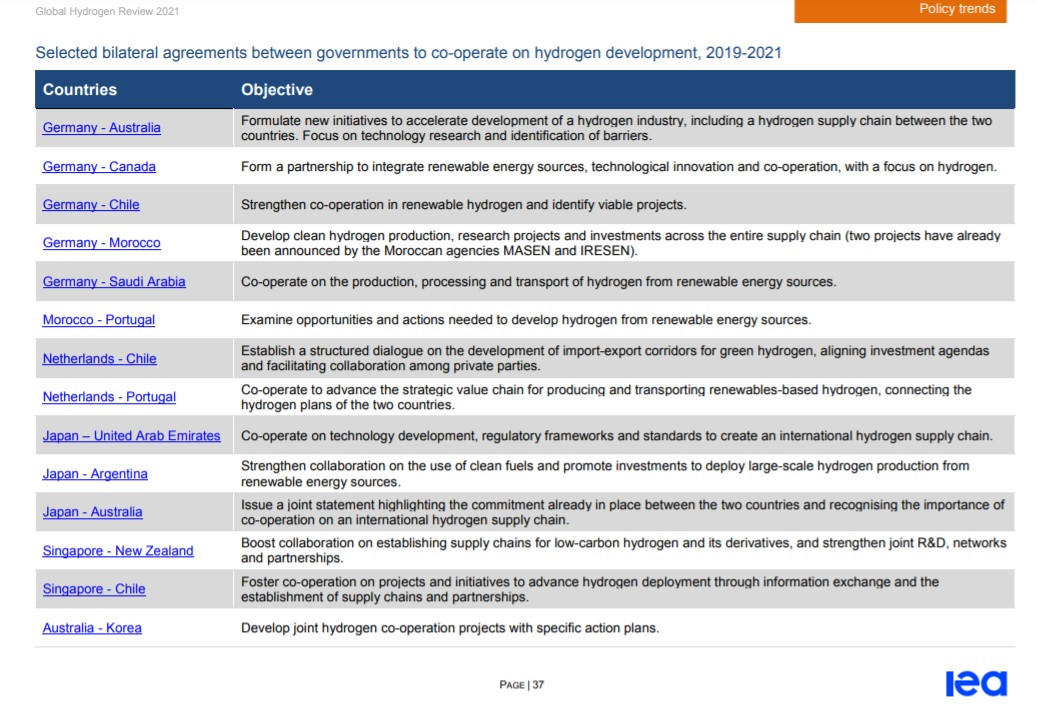 Multilateral initiatives and projects can promote knowledge-sharing and the development of best practices to connect a wider group of stakeholders.

In the midst of increasing viability of the technology, government support and investor interests in several markets, significant growth opportunities thrive for the green hydrogen sector in Asia Pacific over the coming years.

Asia Pacific region continues to be a high-potential market, as it remains the fastest-expanding region for energy demand and renewables growth over the coming decades. The potential also offers a possible secondary use for surplus power generation from intermittent renewables as a form of energy storage. 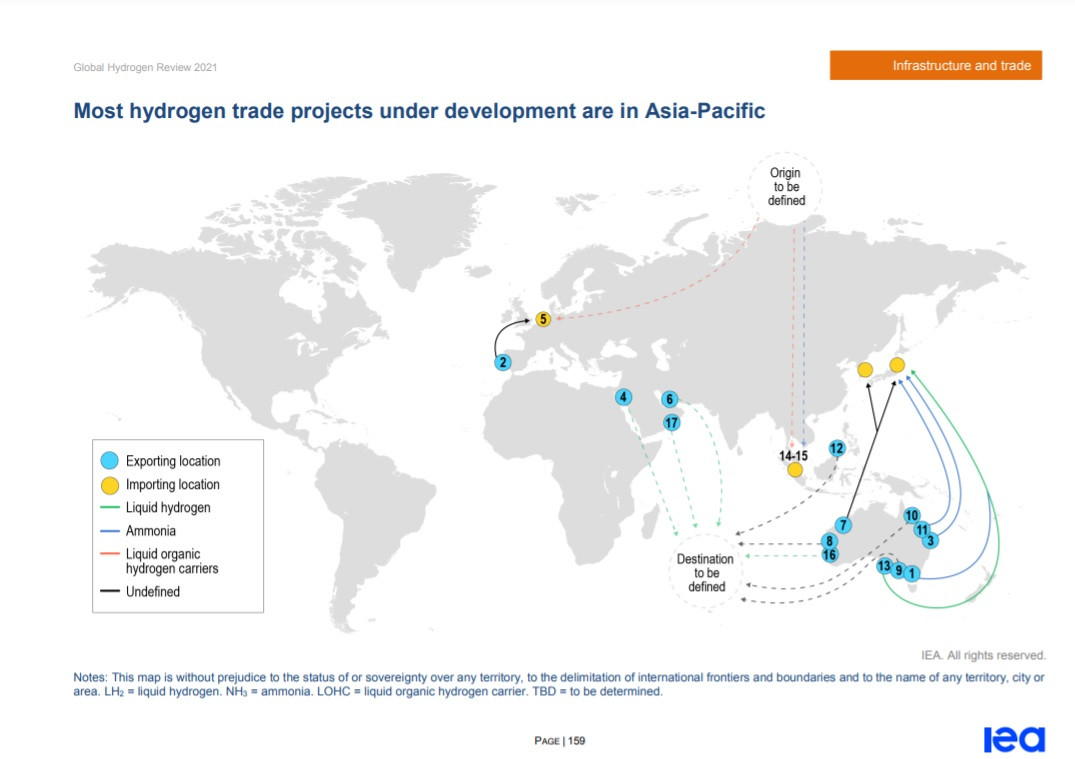 Japan sees hydrogen as a major way to decarbonize its economy while sustaining its industrial competitiveness. Hydrogen is among the 14 sectors identified under the Green Growth Strategy Through Achieving Carbon Neutrality in 2050. The Japanese government doubled down on hydrogen with an update to the green growth strategy, announced in June 2021, that adds specific action plans to priority sectors.

Three main objectives of the roadmap:

The country seeks in the long term to shift the source of hydrogen and fuel cells from fossil fuels like natural gas to renewable energy, involving a growing volume of domestically sourced renewable energy.

India has been taking promising steps in the direction of its ambitious plan of both producing and exporting green hydrogen.

Realizing the importance of hydrogen for the decarbonization of industry and helping the country to embark on a carbon-neutral energy system in the future, the government of India is laying a lot of emphasis on hydrogen, especially generating hydrogen from green power sources.

As a climate-conscious nation, India has taken several measures that strengthen its promise to the environment. The launch of the National Hydrogen Energy Mission as announced by Prime Minister Narendra Modi during his address to the nation on 15th August 2021 – the 75th Independence Day, also reinforced the country's commitment towards a clean and green future.

Dr. Jitendra Singh, Minister of State (independent charge) of the Ministry of Science launched the National Hydrogen Portal (www.greenhydrogen-India.com). The platform aims to become a one-stop information source for research, production, storage, transportation, and application of hydrogen across the country & Technology.

With the hydrogen economy set to boom in the next few years globally, Europe is emerging as the clear leader in planned installations and government policy, supporting the sector.

The European Green Deal combines the twin effort of reducing our greenhouse gas emissions and preparing Europe's industry for a climate-neutral economy. Within this framework, hydrogen has been singled out as central for addressing both issues and for evolving our energy systems.

Apart from setting out policy and strategy guidance on hydrogen, the EU also supports many projects and initiatives on hydrogen.

Over three decades, the EU's hydrogen strategy aims at investing at least €470 billion in the generation of hydrogen, preferably from renewable sources, with €340 billion being allotted to photovoltaics and wind energy development. By 2030, a green hydrogen production capacity of 80GW is to be achieved in the EU. For this purpose, the EU established the European Clean Hydrogen Alliance (ECH2A).

Recently, the European Clean Hydrogen Alliance announced a pipeline of projects that the European industry is undertaking to roll out the European hydrogen economy on a large scale. 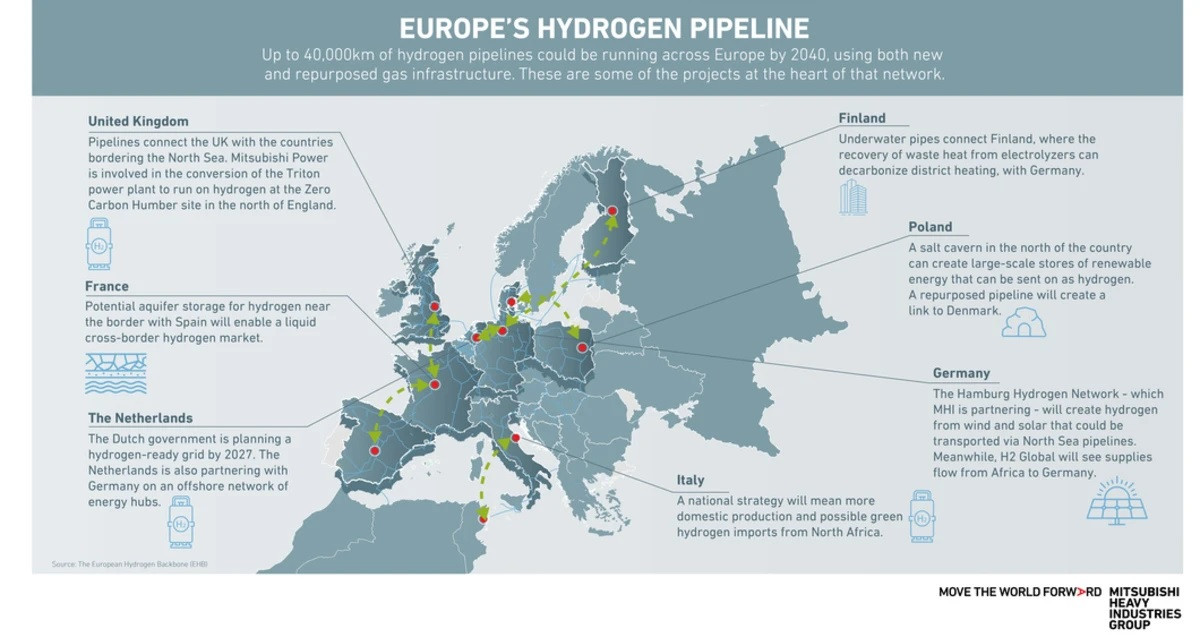 Europe is leading electrolyzer capacity deployment, with 40 percent of global installed capacity, and is set to remain the largest market in the near term, on the back of the ambitious hydrogen strategies of the European Union and the United Kingdom. 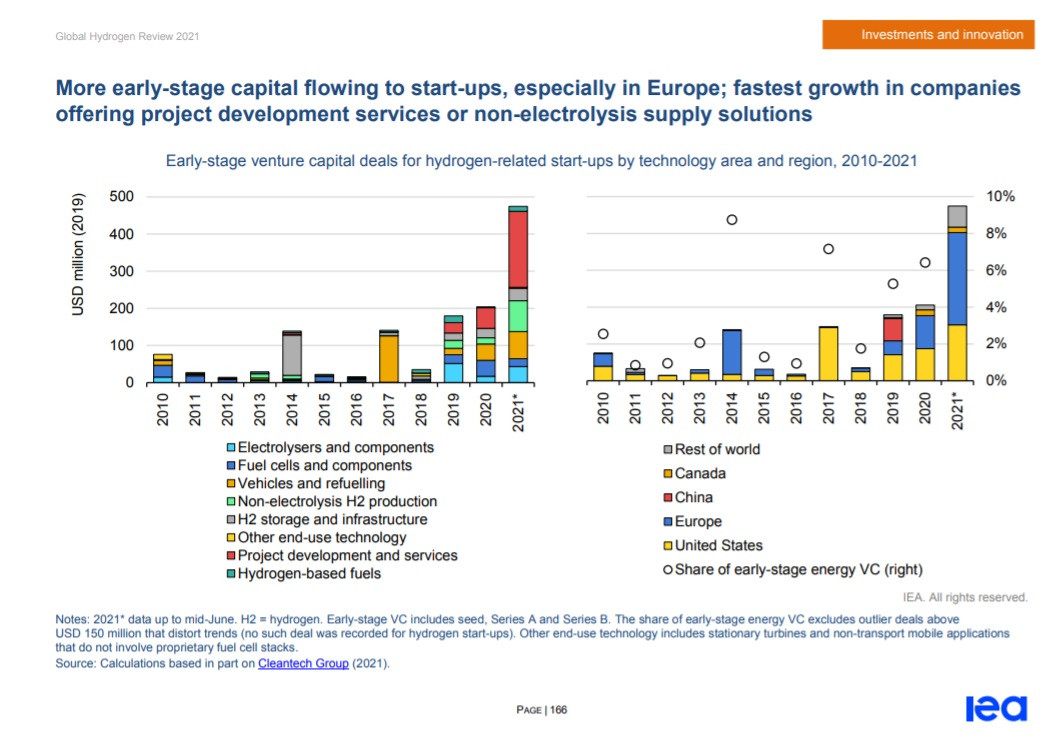 The U.S. is already heavily engaged in the hydrogen economy with hundreds of millions of dollars of public and private investment per year.

The Hydrogen Shot establishes a framework and foundation for clean hydrogen deployment in the American Jobs Plan, which includes support for demonstration projects. Industries are beginning to implement clean hydrogen to reduce emissions, yet many hurdles remain to deploy it at scale. Currently, hydrogen from renewable energy costs about $5 per kilogram.

Achieving the Hydrogen Shot's 80 percent cost reduction goal can unlock new markets for hydrogen, including steel manufacturing, clean ammonia, energy storage, and heavy-duty trucks. This would create more clean energy jobs, reduce greenhouse gas emissions, and position America to compete in the clean energy market on a global scale. These efforts would ensure that environmental protection and benefits for local communities are a priority.

In July, the DOE announced that its Office of Energy Efficiency and Renewable Energy will supply $36 million, and the Office of Fossil Energy and Carbon Management will supply $16.5 million for the Hydrogen Energy Earthshot, bringing total funding to $52.5 million

The projects include scaling efforts and R&D for: 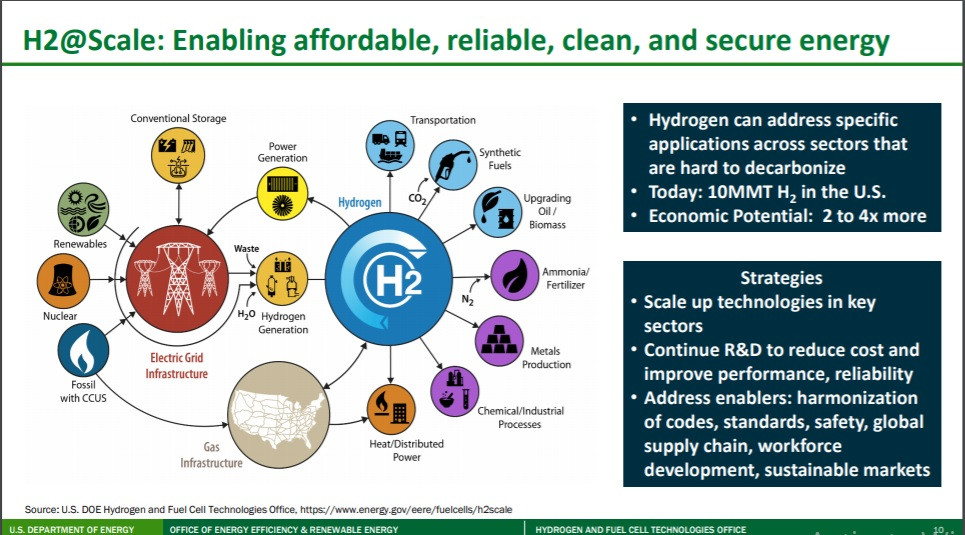 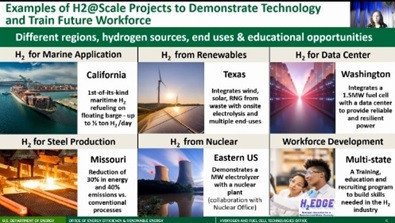 Although the U.S. already produces significant quantities of hydrogen, production predominantly uses hydrocarbon feedstocks and industrial processes that release carbon dioxide and other greenhouse gases into the atmosphere. The adoption of other, cleaner modes of hydrogen production in the U.S. is still in very early stages.

Hydrogen projects in the US