Real time electricity markets provide a mechanism for Discoms to access a larger market at competitive prices. At a national level they can help utilize surplus capacity, and effectively manage diversity in demand. In India, RTM was launched on June 1, 2020, by RK Singh - minister for Power and New & Renewable Energy, making it one of the few nations that have such a market.

What is Real Time Market?

Real-time electricity markets (RTM) are non-discriminatory transaction platforms that can be used for balancing the energy market. In this the market-clearing price is very close to real-time operations of power systems. One of the main functions of RTMs in modern power systems is establishing an efficient and effective mechanism for maintaining the balance in market participation for Distributed Energy Sources, while handling their intermittent characteristics, facilitating asset utilization, and stimulating their active responses. Consequently, RTMs are dedicated to maintaining the flexibility and reliability of power systems.

Delivery period for RTM will be a half-hourly market. Buyers/sellers would have the option of placing buy/sell bids for each fifteen-minute time block in the given half-hourly RTM block. And the price discovery mechanism would be double-sided, closed auction a uniform price, similar to existing mechanism in Day Ahead Market (DAM).

India has the benefit of an abundance of RE and is also planning to add more of RE to its portfolio, making it difficult for utilities to manage. Therefore, by introducing real-time power market we can deal with the renewable interference and Discom / Generators can manage their power portfolio in a better manner. With more and more RE capacity being added, there will be sudden ramp up and down in the system. The consumers or the Discoms can plan their energy supplies in a better way and generators will be able to increase or decrease their output accordingly. Under the RTM, there will be 48 sessions of half-hour each in a day. It means that trading of electricity would be done round the clock. After closing of the hour-on-hour session, the power delivery can be scheduled at an interval of one hour.

If a consumer buys power in the 11.30 am-11:30 am to midnight session, the electricity supply can be scheduled as early as 1 pm on the same day.

The RTM is designed based on Intra Day Market Mechanism as follows.

For operationalizing RTM, the schedules decided at the end of RTM clearing are both financially and physically binding. 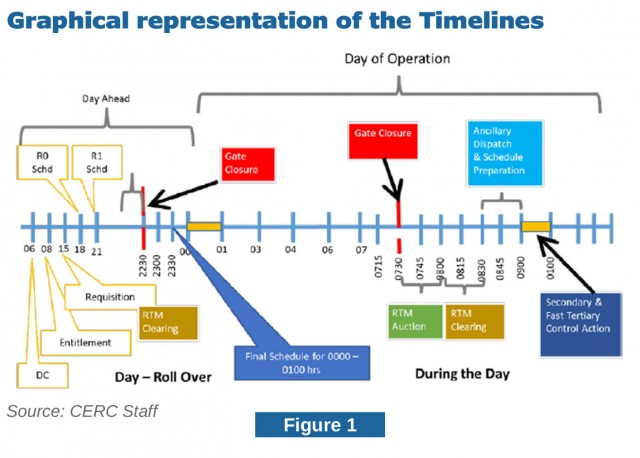 For this, the concept of Gate Closure is introduced. For each fifteen-minute block in one hour, those with demand for electricity or Discoms or traders will assess in advance what the demand will be. They'll then place their bids in the RTM for that volume of electricity. Similarly generators/ traders will place their offers. To ensure firmness of such bids and offers, the gate for schedule revision will close before the start of the auction, as depicted in Figure 1. In this illustration, the gate for schedule revision for the hourly trade for 00.00 – 01.00 Hrs closes at 22.30 Hrs of the previous day. The auction is conducted for the delivery period 00.00 – 01.00 Hrs. This process is continued every hour thereafter. The gap between gate closure and delivery period will be reduced gradually as automation of the process improves. 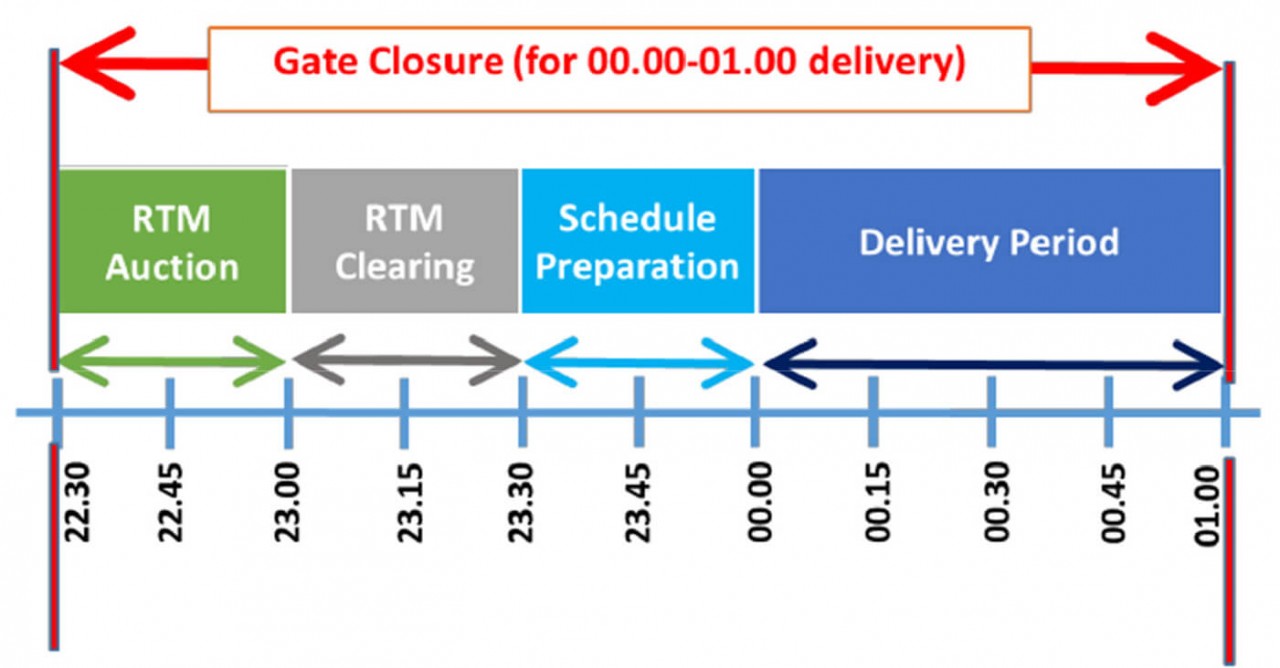 Benefits of RTM for the Discoms

In India all the states are tied up with long-term contracts for supply of power at higher rates. For fulfilling their peak load demand most states run their own plants during this period and for rest of the day these plants run at technical minimum because of which operation costs becomes high. But after the introduction of power exchange and DAM, these states are able to reduce this burden by replacing this costly generated power. It has been estimated that if each state were to replace its costly generation with cheaper resources available (in Real Time) in other states, the total daily power purchase cost of the country would reduce substantially. It is expected that liquidity in the proposed RTM will increase because of the design change in the form of auction and gate closure.

With introduction of RTM market generators have now the mechanism to participate and share the net gains with Discoms for their un-requisitioned capacity. On the other handDiscoms can now plan their power purchase more effectively and close to the real time as they have more competitive price available in the market.

Currently Discoms have the right to recall four time blocks ahead of actual dispatch. Once the RTM with gate closure is introduced, the flexibility to revise schedule will change. While the gap between gate closure and delivery period will be reduced with automation of the process. By introduction of RTM, Discoms will benefit on the following counts:-