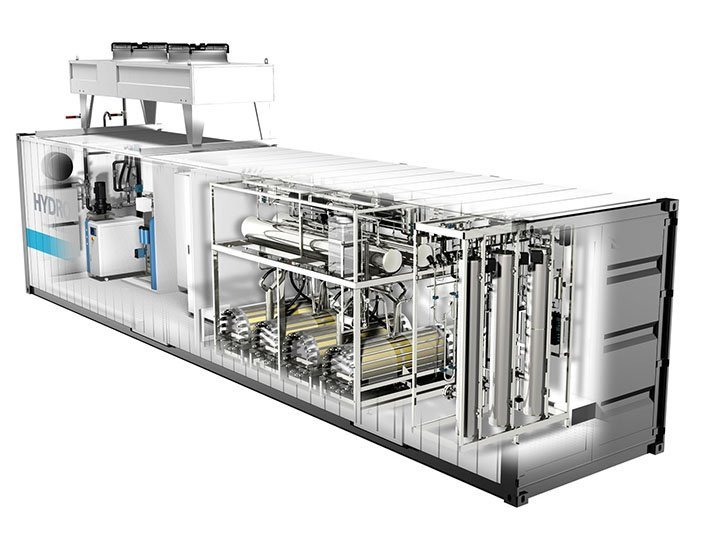 Everfuel A/S has announced the plans of the HySynergy Phase II development of a 300MW electrolyser and Power-to-X (PtX) facility adjacent to the Fredericia refinery. The HySynergy Phase II involves a significant scale-up in the production of green hydrogen, planned for a complementary use in both zero-emission hydrogen mobility and as green feedstock to various fuel refining processes. Upon its realization, the combined facility will have the capacity to lower the Danish land-based transport sector-related carbon dioxide (CO2) emissions by nearly 5 percent already by 2025, directly contributing to the Danish government objective of reducing CO2 emissions by 70 percent by 2030.

Approximately 20 percent of the green hydrogen produced at the facility will be dedicated to direct usage as pure hydrogen for zero-emission mobility, while 80% will be used as a feedstock for the fuel refining processes. The new facility will enable a 214,000-ton reduction of annual CO2 emissions from the industry and mobility sectors, equal to approximately 4.7 percent of the total CO2 emissions from the Danish land-based transport sector1). The new facility can also provide oxygen for on-site carbon capture by an oxyfuel process and a 25 percent reduction of the Fredericia refinery emissions by using the green hydrogen for the production of gasoline, diesel, DME, and M85 with a lower carbon footprint. Thus, the second phase of HySynergy may also include the production of methanol.

"This is a truly unique project and a global showcase of cross-sectoral PtX synergies, furthermore, posing a significant CO2 emissions reduction potential on both near- and long term. Adding to the substantial here-and-now CO2 reduction potential from the planned 80/20 capacity distribution between refining and direct use in mobility, a gradual increase in hydrogen capacity used directly for land-based transportation may further increase the CO2 reduction up to an annual 450,000 ton, equal to the CO2 displacement from 500,000 electric cars2). Put in another perspective, this is equivalent to a ~10 percent reduction of the total land-based transport emissions in Denmark. We are eager to proceed with the HySynergy Phase II project and continue bringing Fredericia and the Danish Triangle Region forward as a European hub for PtX and green fuels", says Jacob Krogsgaard, founder and CEO of Everfuel.

Everfuel has commenced further dialogue with public and private stakeholders and has applied for project funding under the Important Projects of Common European Interest (IPCEI) scheme for the development of large-scale hydrogen projects. The target is to bring the HySynergy Phase II to a final investment decision (FID), subject to regulatory approvals and funding, by late 2022, with commissioning in late 2024. The expected project budget is up to DKK 1,9 billion, equivalent to EUR 250 million.

The company is currently developing the HySynergy Phase I 20MW electrolyser next to the Fredericia refinery. The final regulatory approval is expected to be completed before summer 2021, with the start of construction planned for the third quarter. The HySynergy Phase I and II are part of Everfuel's announced plan to invest EUR 1.5 billion in developing the green hydrogen value chain in Europe and reach EUR 1 billion of annual revenue from the sale of hydrogen before 2030.

"Fredericia is an energy metropolis of Denmark. With that position comes the responsibility to contribute to Denmark's green transition, in which we see great potential in the development of green fuels. The HySynergy project, led by Everfuel, is a good example of how we can contribute to reducing CO2 emissions in Denmark and help achieve the nationwide goal of 70 percent CO2 reduction by 2030, whilst at the same time realizing the objectives set out in the City Council's climate plan. Now the planning is underway so that the framework can be put in place. I look forward to following the project", says Steen Wrist, Mayor of Fredericia.