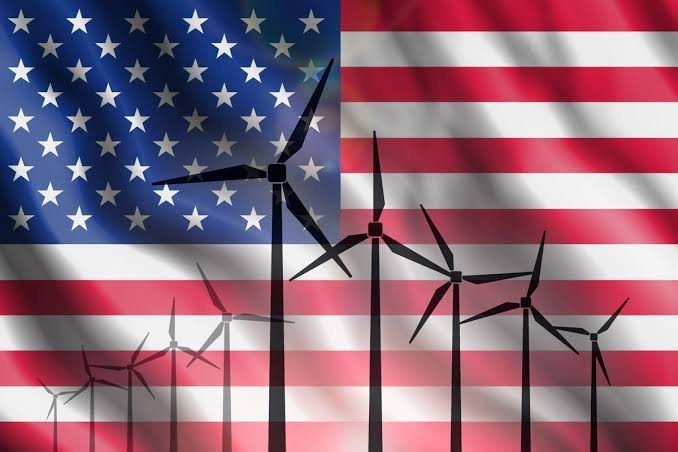 The U.S. energy storage market set a record in the first quarter of 2022, with grid-scale installations totaling 2,399 megawatt hours (MWh), the highest capacity for Q1 on record.

The volume of grid-scale energy storage installations in the United States increased four times over that seen in the first quarter of 2021, According to Wood Mackenzie and the American Clean Power Association's (ACP) latest US Energy Storage Monitor report, grid-scale installations total 2,399 MWh.

The Battery Energy Storage Systems market in the U.S. is estimated at US$1.3 Billion in the year 2022. The country currently accounts for a 27.61 percent share in the global market. 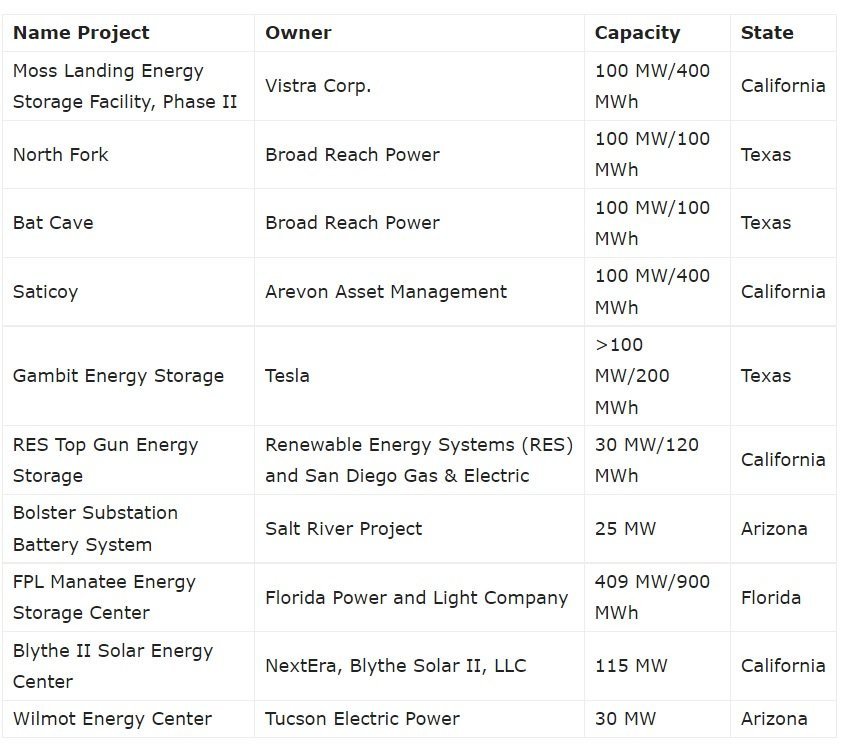 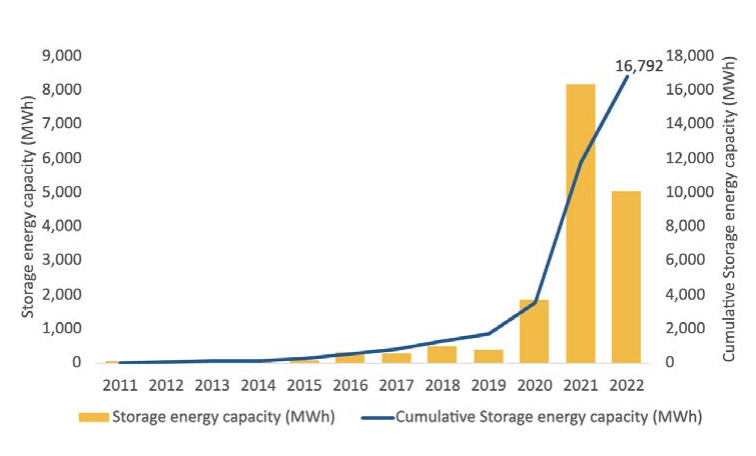 More than half of the 51 GW of planned solar and battery storage within the next two years will be in just three states: Texas with 12 GW (23 percent), California with 11 GW (21 percent), and New York with 4 GW (7 percent).

A 2021 report by the US Department of Energy's Solar Futures Study estimates that as much as 1,600 GW of storage could be available by 2050 in a decarbonized grid scenario if solar power ramps up to meet 45 percent of electricity demand as predicted. Currently only 4 percent of US electricity comes from solar.

California and Texas are at the center of the U.S. energy storage market. Combined, the Golden State and the Lone Star State had nearly 3 GW of power storage capacity online entering 2022 and another approximately 20 GW planned.

Substantial development is also underway in other Southwestern states, especially in Nevada, as well as in New York, Hawaii, and Massachusetts.

Presented as the biggest such project in the world, Vistra Corp.'s Moss Landing Energy Storage Facility is an up to 1,500-MW project located at a gas-fired plant in Monterey County, California.

Vistra intends to bring that capacity back online in the coming months and recently secured a new contract with PG&E for an additional 350 MW of four-hour batteries in 2023.

Next to that facility, the PG&E Corp. utility this year plans to complete its 182.5-MW/730-MWh Elkhorn project, previously scheduled for completion in 2021. 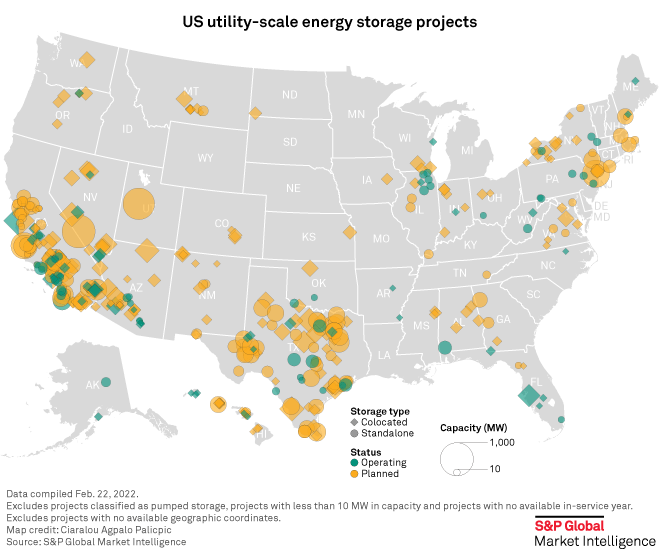 President Joe Biden has set an ambitious goal for half of new car sales to be electric, fuel cell or hybrid electric vehicles by 2030.

The Department of Energy's (DOE) Vehicle Technologies Office highlights that as of April 2022, the cumulative number of passenger plug-in car sales reached 2.6 million. That's the number since December 2010, when the original Nissan LEAF and Chevrolet Volt entered the market, marking a new chapter for mainstream plug-ins.

Over 413,000 EVs were sold in the US in H1 2022, including over 64,000 electric pick-up trucks. EV sales grew 62 percent year on year and represented 6 percent of all passenger vehicles delivered. The US now accounts for 10 percent of global EV sales.

Tesla remains the dominant nameplate in EVs. In addition, more than 30 EV models are available in the U.S. from a wide variety of automakers including Ford, General Motors, Hyundai, Kia, and Volkswagen, along with luxury car brands such as BMW and Mercedes-Benz.

The huge potential for hydrogen production, storage and transportation throughout the USA is endless with an extensive gas infrastructure already in place. The Biden administration has recognized hydrogen's 'integral role' in meeting ambitious emission reduction targets and achieving the energy transition.

SoCalGas and SDG&E have submitted blending proposals of up to 20 percent hydrogen in natural gas pipelines for combustion over the next five years. This proposal did not address NOx emissions concerns

Florida Power & Light is slated to complete a 20 MW green hydrogen plant by 2023. This hydrogen will be used in a 20 percent blend at FP&L's 1.75-gigawatt Okeechobee gas-fired plant.

New Jersey Resources Corp. has begun construction on a green hydrogen project in Howell, N.J. The project will use electricity from a nearby solar farm to generate green hydrogen which will then be injected into the company's gas distribution system.

NRG has filed for a repowering of their Astoria, Queens peaker power plant based on a plan to convert to hydrogen by 2040 (source). This plan does not address NOx emissions concerns in its most recent Draft Supplemental Environmental Impact Statement (source).

JERA Americas has signed an agreement with GE to develop a green hydrogen demonstration project in Dover Plains. The agreement calls for using hydrogen for 5 percent of the fuel in one of the three units at the power station. This initiates the first step toward converting to a 100 percent hydrogen fuel capable plant 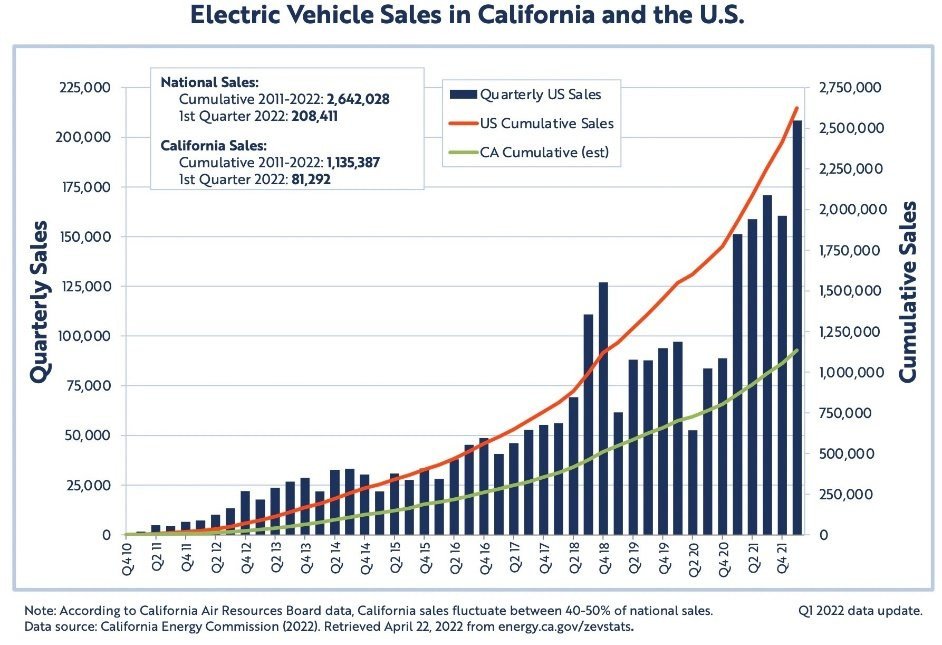 Dominion Energy North Carolina has asked regulators for approval of a $215,000 pilot project to blend 5 percent hydrogen with natural gas. The proposed project will be run on a closed loop to customers near Dominion's NC headquarters in Gastonia. Dominion is running a similar project with its partner utility in Utah. Neither pilot project has disclosed potential emission threats to local communities (source).

New Fortress Energy is currently building new GE H-class gas turbines in its Hannibal, Ohio plant. The 485 MW plant will burn a 15-20 percent blend of hydrogen and natural gas (the highest amount the H-class turbines can burn), starting in November 2021. New Fortress has plans to burn 100 percent hydrogen at this plant in the next decade. The H-class turbine has the same NOx emissions as a newer natural gas turbine.

Duke Energy Carolinas, Siemens Energy, and Clemson University have partnered to create a hydrogen and combined-heat-and-power project that will electrify and heat the university's campus. The Siemens Energy will study the use of its Silyzer electrolyzer to produce hydrogen fuel to help power the existing SGT-400 natural gas turbine at the Clemson plant. The project has not announced what blend of hydrogen it will utilize in the study (source).

Gulf region utility Entergy has announced plans to use existing oil industry hydrogen pipeline networks and underground salt caverns to ship and store hydrogen and replace natural gas fired power. The utility has announced plans to build a plant near its existing hydrogen pipelines in Sabine, Texas, that will run on a 30 percent hydrogen/natural gas blend when it begins commercial operation. Entergy partnered with Mitsubishi power on the plant; while no emission disclosures have been made, Mitsubishi's latest generation of hydrogen blend furnaces produce roughly the same NOx emission as a newer natural gas plant.

The Intermountain Power Project has partnered with Mitsubishi Power on a $2 billion power plant upgrade that will have the plant running a 30 percent natural gas/hydrogen blend by 2025 (source). However, according to the plant's own documentation, the plant will have the same NOx and CO2 emissions as a newer natural gas plant (source). At a 30 percent blend, the plant will use the same amount of water as a coal plant (source).

Balico LLC has signed a hydrogen integration contract with Mitsubishi Power for its 1.65GW natural gas-fired power plant in Charles City County, Virginia. Although the producer has not yet stated what level of hydrogen blending, they plan to pursue, Mitsubishi's dry low NOx models can generally manage a maximum 30 percent blend. This project has already come under fire for not addressing criteria pollutants in its environmental review.

Dominion Energy has also stated that they will be pursuing a 5 percent blend of hydrogen in their natural gas pipelines beginning this year.