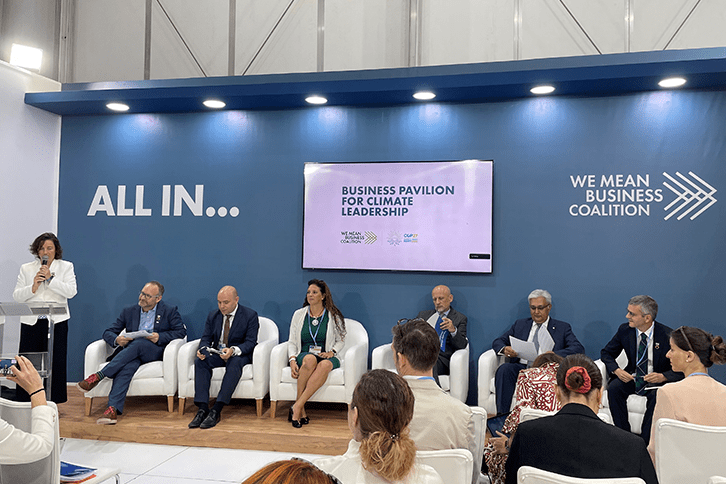 Iberdrola presentation at a COP27 session.

An active participant in all climate summits since Copenhagen, Iberdrola has declared at the on-going COP27 in Sharm el Sheikh (Egypt) to go carbon neutral in its power generation plants and own consumption by 2030, and reaching zero net emissions in all its activities by 2040.

The Spanish electric utility company presented its climate action plan at the summit, along with a biodiversity plan that aims to achieve a net positive impact on species and ecosystems by 2030.

Iberdrola's executive chairman, Ignacio Galán, through a telematic intervention referred to the present situation. "The current crisis has further reaffirmed the need to accelerate electrification with renewables and electricity grids to achieve full decarbonization and also energy self-sufficiency".

"After 20 years of trajectory, the Climate Action Plan is a new boost to Iberdrola's commitment to zero net emissions as a means of preserving the environment and generating employment and industrial development. The next decade will be crucial if we are to achieve the climate goals and protect biodiversity, and we must all work together today to achieve them", he added.

The plans consolidate Iberdrola as a business leader in the fight against climate change and for the protection of biodiversity, with ambitious goals based on science and fully backed by its investment plan.

To lead the energy transition goals, Iberdrola is spearheading the development of green hydrogen with over 60 projects in eight countries, including Spain, the United Kingdom, Brazil, the United States, to meet the demand for electrification and decarbonisation in sectors such as industry and heavy transport. The company has created a new green hydrogen business unit in this regard.

It is also concentrating on almost all other forms of renewable energy sources for power generation, including off-shore wind energy, solar power, hydro power, and integration into smart grids.