E-Mobility 2021: India – an emerging force to reckon with

The domestic EV industry saw record sales and fresh investments pouring in, despite all odds with the second wave of the COVID-19 pandemic. But, are we on the right track towards the country's e-mobility vision of 2030?

India is the fifth-largest automotive market in the world with about 3.49 million vehicles sold last year and is slated to move further up to the third position by 2030 – the year the country has set itself a target of achieving 30 percent EV penetration. Thanks to the robust auto manufacturing ecosystem and strong demand base in the country, the global significance of the Indian auto industry and its likely transition towards an 'electrified' future is simply hard to ignore. Notably, the sheer resilience of its emerging EV industry to the harsh market impacts of the second wave of pandemic this year, both in terms of EV sales and new investments across the value chain, is an added affirmation to its growing stature.

Despite poor buyer sentiments, EV registrations are fairly increasing month-over-month since the beginning of this year, except for April and May due to the pandemic second wave in the country. For the first time, EV sales in India crossed the 40,000 units mark in November, succeeding the earlier milestone of 30,000 units in September just two months before (Figure 1). There is no doubt that this uptrend will continue to take an even better shape in the coming months, more so next year as well.

In terms of vehicle segmentation, e-2W dominates almost half of the cumulative EV sales figures, closely followed by e-3W (passenger), e-3W (cargo), and electric cars (Figure 2). Thanks to the exorbitant petrol (taxation) pricing and improving cost parity of electric scooters, as against their conventional rivals, the e-2W segment is expected to grow further into the mass market and lead the EV race in 2022. Leading manufacturers are ramping up their production capacities and product portfolio to meet the changing market demands.

Electric cars, on the other hand, are bound to become popular largely among the luxury and niche class buyers, as a slew of high-cost battery-electric cars from luxury brands are awaiting market launch in India next year. The fortunes of the e-3W category will continue to be dependent on large-scale fleet aggregators and last-mile transportation/ mobility service providers, more so in urban markets. Although the pandemic had dealt a severe blow to the bus operations in general, the adoption rate of e-buses among State-owned transport agencies is gradually picking up since the beginning of this year, thanks to procurements by State-owned transport corporations. ICRA Ratings predict that e-buses are likely to account for 8-10 percent of new bus sales in India by FY2025. 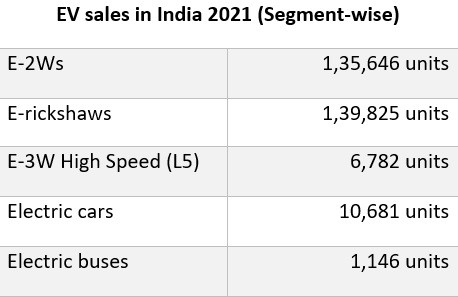 There has been considerable traction in the sphere of charging infrastructure as well this year. Apart from vehicle manufacturers and power charging firms, startups and tech-enabled companies like Massive Mobility, goEgoNetwork, moEVing, BluSmart, and Kazam have announced strategic partnerships to further their footprint in this space. Further, the announcement on the development and setting-up of low-cost AC charging stations by the government is a significant step towards taking the charging infrastructure to the masses. The AC charger point allows up to 3kW of power to be drawn, meant for e-scooters and auto-rickshaws. The Bureau of Indian Standards (BIS) is yet to publish standards for the same.

On the investments front, the pandemic-induced market uncertainties did not deter investors in encasing new opportunities in the Indian e-mobility sector. From January to July this year, a cumulative investment of about ₹25,045.31 crore and raised funding of about ₹1652.15 crore has been recorded in the field of e-mobility in India, including those either made or announced by OEMs, battery and other component makers, EV-based logistics companies, charging companies, and so on. This space is attracting investments from both traditional automotive companies as well as e-mobility startups like Ola and Ather Energy.

Leading the list are companies like US-based C4V (with ₹4,015 crore MoU for manufacturing Li-ion battery cells in Karnataka), Mahindra & Mahindra, Ashok Leyland (under its subsidiary Switch Mobility), Hyundai, Triton, Omega Seiki, Oye! Rickshaw, and so on. The months of August, September, and October also saw huge investment announcements to the tune of about ₹11,357.12 crore reaching headlines, including that of Tata Motors raising ₹7,540 ($1 billion) in its passenger EV business and Ola Electric getting over ₹2,980 crore ($400 million) from various investors. 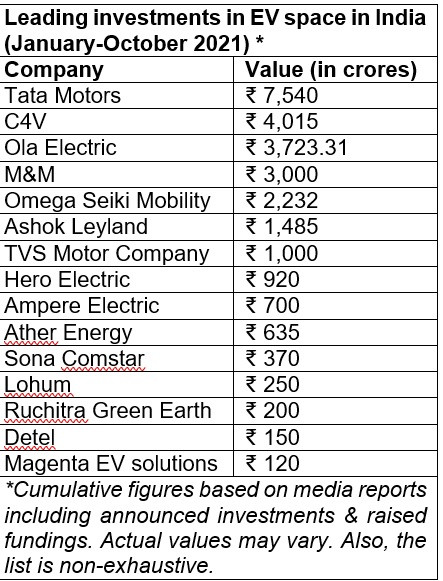 States like Tamil Nadu and Karnataka are emerging as favored destinations for EV investments in India. It is estimated that TN is likely to bag investments of ₹15,000-20,000 crore in this regard by the end of this year, and is also planning to double EV investments to ₹40,000 crore in the next two years with proactive investor-friendly policies and skilled manpower to encourage both vehicle and battery manufacturing.

Karnataka is not far behind either, as the State had already announced investments worth ₹23,000 crore last year. Gujarat, on the other hand, is emerging as a preferred region for battery manufacturing, ACC in particular. The other States like Maharashtra, Andhra Pradesh, and Telangana are also trailing behind this trend with attractive incentives for EV manufacturing.

Having said that, factors like inadequate market demand for EVs and ACC batteries, dependence on imports for critical EV-related electronics and battery raw materials, lack of charging infrastructure, and conducive financing options (for both manufacturers and EV consumers) continue to inhibit more investments in the Indian EV space. Higher upfront cost and poor resale value haunt EV buyers, more so in the passenger car, LCV, and bus segments.

In this regard, a stable policy and incentive regime for EVs and hybrids is the need of the hour. Although the FAME II has been recently revised after two years of lacunae by offering more incentives for e-2Ws and roping in EESL to aggregate demand for e-3W and e-buses, there are few genuine demands from the industry that need to be met. Firstly, the subsidy slab for e-3W needs to be relaxed from ₹10,000 to ₹15,000 per kWh to enable large-scale adoption for both passenger and cargo applications. Even for e-2W, the eligibility criteria for subsidy remains largely stringent, thereby excluding a majority of products available in the market, and doing no good. It is also to be noted that the scheme excludes electric cars meant for private use. Secondly, private bus operators can be encouraged to involve in GCC bids under the FAME II on an OPEX basis, to expand the scope of e-bus adoption.

On the right track?

If India is resolute in its 2030 e-mobility vision, the country needs to realize a cumulative investment of about ₹12,39,800 crore ($177 billion) in vehicle production, ₹20,600 crore ($2.9 billion) in terms of charging infrastructure, and ₹85,900 crore ($12.3 billion) in battery manufacturing, according to an independent study undertaken by CEEW Center for Energy Finance (CEEW-CEF). This would translate into a demand basket of about 102 million EVs and 158 GWh of battery units in total by FY30 – a whopping ₹14,42,400 crore ($206 billion) revenue opportunity for the industry – adds the study.

With India pledging to go net-zero by 2070, the e-mobility vision of 2030 can be the first big step to embark on in this direction. But this in itself is a mammoth task for the country, which needs a coordinated and concerted effort from all stakeholders including the industry, policymakers, and financing agencies.

Can 2022 be the tipping point for the country in this regard? First things first, we have to realize that all the progress that we are making in terms of EV manufacturing are still 'baby steps' and have a long way to go in establishing a vibrant EV ecosystem to achieve the 2030 dream. Least assured, by next year, we will get to know how strong ACC battery manufacturing emerges in India, given the much-needed push from all sides, which is perhaps the most critical aspect of the 2030 vision.