What to expect from the EV market post-pandemic?

As the world shut down to combat the coronavirus so did the EV market, with sales dropping drastically, first in China, and then in the rest of the world. Adam Panayi, Managing Director of Rho Motion, takes us through the EV sales recovery that followed, and what to expect in the post-pandemic era.

Following the drastic dip in EV sales in the first and second quarters of 2020, there was a very strong recovery in EV sales, as governments in many major markets introduced huge stimulus packages to protect economies from the worst of the downturn. A key component of this for many countries was an emphasis on funding environmental technologies, and the EV market, particularly in Europe, benefitted.

In Germany, for example, the EV subsidy was increased to a maximum of €9,000 under its COVID-19 relief package, while in France the maximum subsidy was increased to €7,000 under its relief fund. What is significant is that both countries have large automotive sectors, which are transitioning to non-ICE technologies over this decade, and in our view, governments acted to support these industries through this process. As a result, sales started to increase sharply in the second half of the year, with the European market growing very strongly.

Through the first quarter of 2021, year-on-year growth has been exponential as a result of the relative weakness of Q1 2020. While we do not expect that the levels of growth over 100 percent are sustainable throughout the year, we do now expect growth of over 50 percent year-on-year for the EV market across all vehicle classes. Resulting in sales of roughly 4.9 million units. 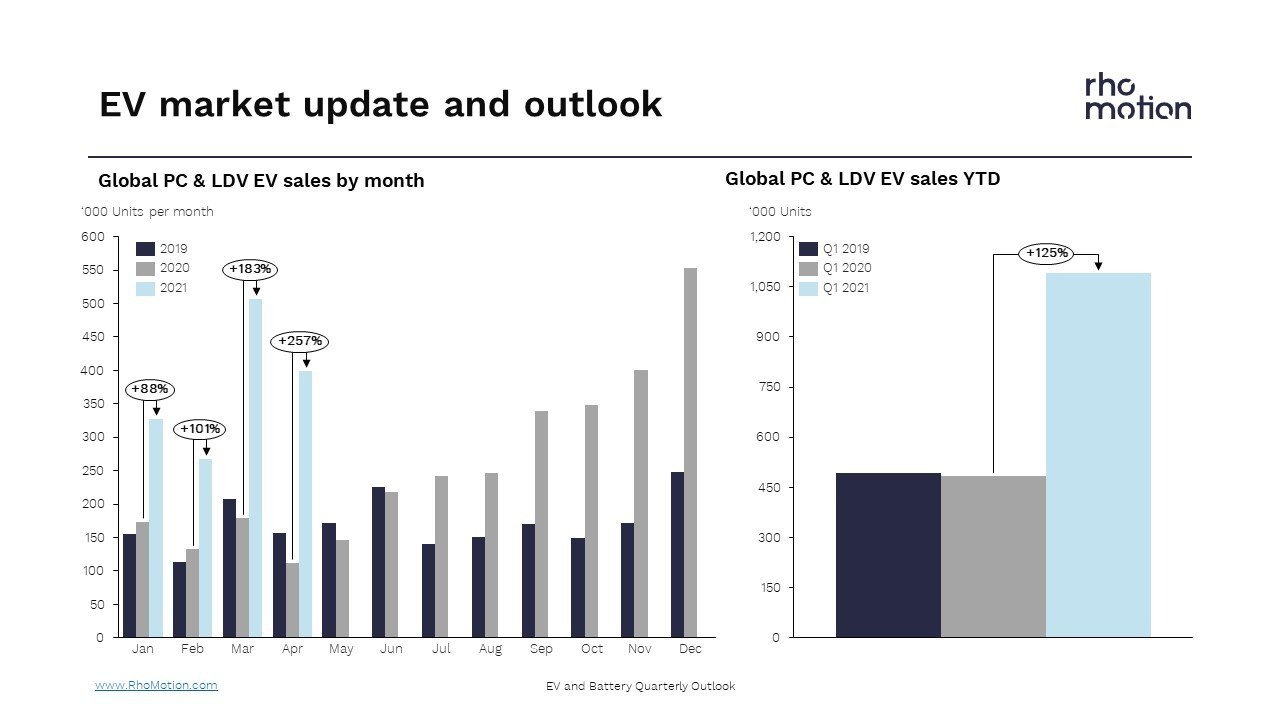 The stimulus packages that were drawn up in 2020 are now being wound down and phased out, but we now point to several factors to support our assumptions on growth.

In the EU, EFTA, and UK, there have been several announcements from OEMs targeting high levels of penetration rates in Europe, notably from Ford and Stellantis. Major European markets, Spain and Italy, have also increased consumer incentives for EVs.

A reduction in super credits, and the fact that 100 percent of all newly registered vehicles will be counted towards CO2 emission targets, will continue to drive a strong push in EV sales throughout 2021. Further, as we expect a recovery in ICE sales in 2021, this will add upward pressure on fleet average CO2 emissions. It is noteworthy, therefore, that Q1 2021 penetration rates for multiple major OEMs, such as Daimler and BMW, have increased in the European market. 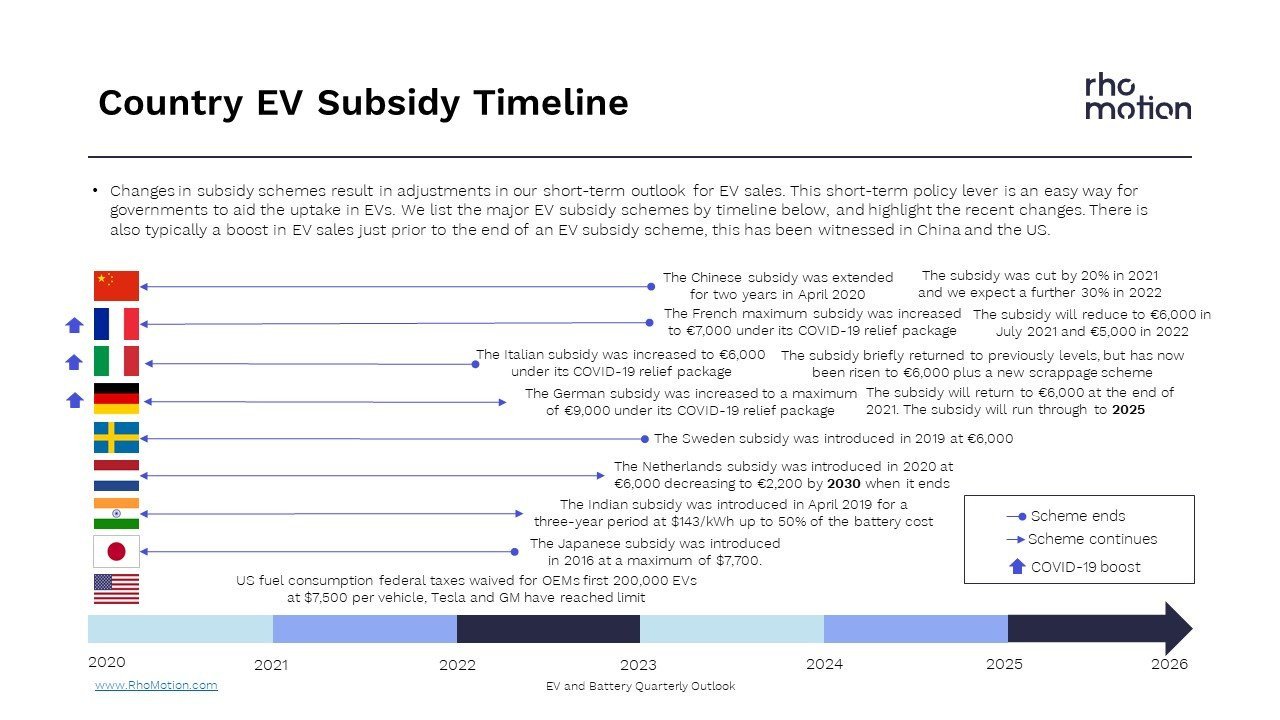 In China, there have been strong sales in the opening four months of the year, despite a 20 percent decline in the maximum EV subsidy in 2021 compared with 2020. There will likely be an increase in EV sales towards the end of the year before the subsidy is reduced by a further 30 percent.

Consumer choice remains a key demand driver, with around 200 separate models sold in 2021 YTD alone. The small, low price, SAIC-GM-Wuling EV continues to lead sales with over 100,000 sold in the opening four months. The second is the MIC Tesla Model 3, followed by BYD's Han BEV. On the battery chemistry side, BYD is expected to use its LFP 'Blade Battery' in all its models going forward, its NCM capacity will serve third-party OEMs.

There have been several commitments from major OEMs in China in Q1 2021. Dongfeng announced all of its new models will be electric by 2024, GAC announced full electrification of its models by 2025, and Chery set a target of 40 percent EV sales by 2030.

In the US, the timing of new incentives is expected to be the key demand driver. A timeline has not been set for the proposed $174 billion investment into the EV market proposed by Biden, but we do not expect an introduction of new policies until Q4 2021 at the earliest.

Once introduced, new National and State announcements will likely facilitate faster EV adoption. President Biden committed the US to halve greenhouse gas emissions by 2030, while the States of California and New York have committed to all zero-emission passenger car sales by 2035, and all heavy-duty vehicles zero-emission by 2045. The State of Washington has committed to BEV only for all cars and LDV by 2030. 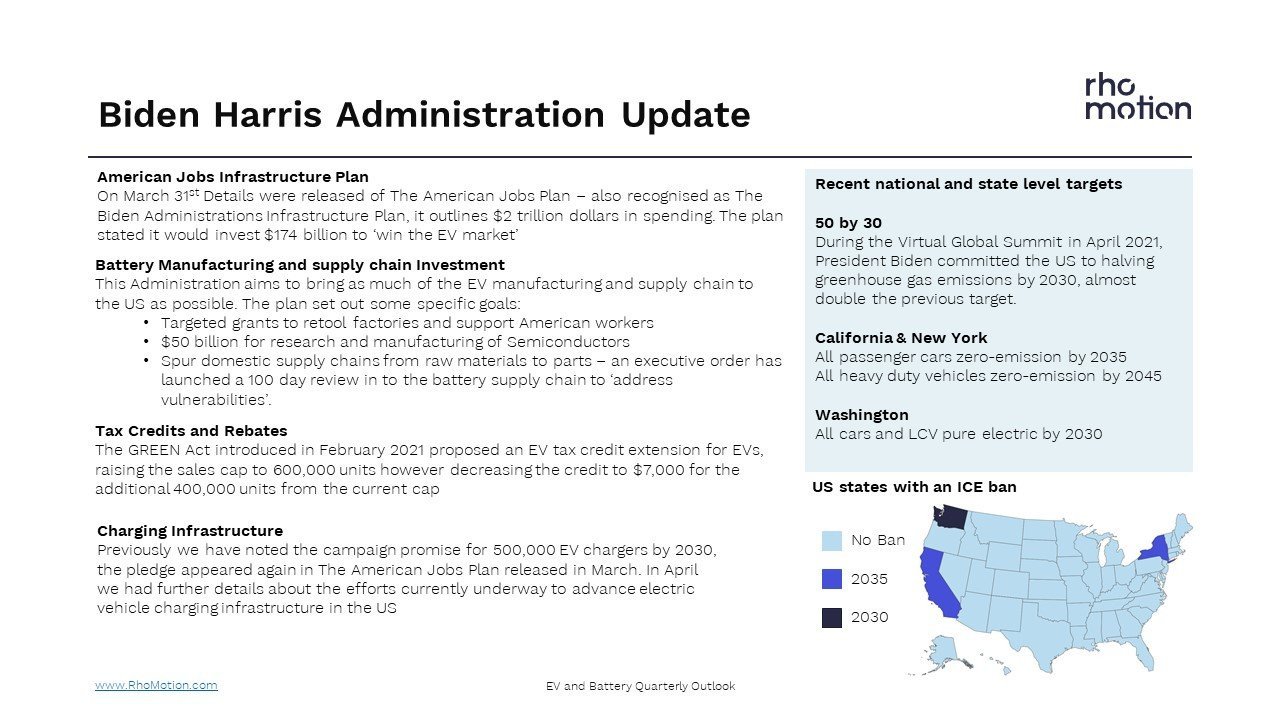