Is India doing enough to encourage domestic manufacturing of advanced battery technologies? Through conversations with many Indian industries who are active or planning to play an active role in this space, it was found that there are many widespread apprehensions. This article intends to list and present viewpoints, keeping in mind the growth of the cell manufacturing industry in other parts of the world.

The world is undergoing a massive transformation in one of the most key aspects governing our lives - Energy. The generation, availability, and use of energy supports all dimensions of our existence. Food production, processing and delivery, infrastructure development, clothing industry, transportation, healthcare and any other activity crucial for our sustenance depends on energy. Over time we have become used to depending on fossil fuels for providing us this key ingredient which supports our society. It is this core enabler which is undergoing transition. 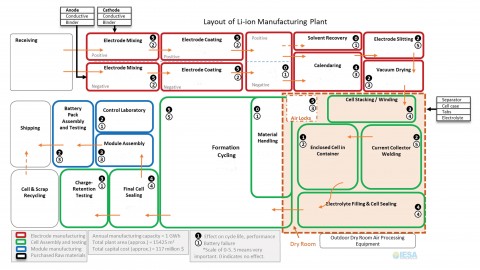 India has shown its commitment to this transition by scaling up deployment and long-term ambitions in renewable energy. It's important to understand that using renewable energy sources not only reduces our carbon footprint, but it is also minimizes our dependence on imported sources of energy, which are a huge drain on our foreign reserves. A chief enabler for making all this happen is energy storage or batteries.
Seeing the imminent demand, it is no surprise that globally the battery industry is swiftly moving towards scaling up their manufacturing capability. A significant portion of research funding is being directed towards development and commercialization of advanced battery technologies through various government sponsored programs.
The question to ask here is whether India is doing enough to stay relevant in this competition and hopefully play a leadership role.
Evolving technology landscape and effect of changing chemistries on existing manufacturing facilities
Li-ion batteries are well adapted for EV applications due to their high energy density. Emerging chemistries are moving towards high nickel and reduced cobalt content due to limitations in cobalt availability and price volatility. Next generation of Li-ion batteries will have solid electrolytes which will permit the use of lithium metal as the anode leading to approximately 25-30 percent improvement in energy density at cell level.
One of the main concerns among industry players is whether new emerging chemistries in this space will cause existing manufacturing facilities to become redundant. Such apprehension is a direct side-effect of the immense flood of news articles promising new technologies with 'superb' performance. This is, however, highly misleading for two main reasons. Firstly, it takes at least 8-10 years for results shown in lab-prototypes to translate to commercial prototypes, in the best case. It takes another 3-5 years at least to increase scale of manufacturing to reach reasonable costs. Secondly, the manufacturing process of Li-ion cells is largely invariant across chemistries.
This means that the evolving landscape of new materials does not necessarily pose any threat of obsolescence to the existing cell manufacturing facilities, as the facilities can be tweaked to adapt to new chemistries. These findings have been confirmed via detailed interactions with many cell manufacturing companies globally. The intermittent chemistries between lithium ion and solid state are developed with intention of using the existing manufacturing lines with minimal tweaks. Hence, the transactional stage between two technologies will be smooth for the battery industry as a whole. 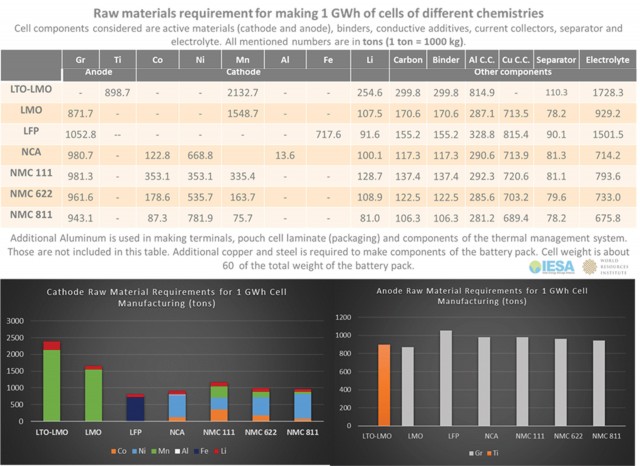 Ensuring robust supply chain of raw materials for giga factories and indigenization of manufacturing of cell components: do we have the raw materials?

Li-ion battery production in giga factories is supported by a large and complex supply chain of the essential raw materials. Global and India statistics of production of key raw materials are presented in this study. For the ores for which there are existing reserves in India (Mn, Ni, Cu and Al), an attempt should be made to produce high value battery components which can be used by local and international cell manufacturing companies. These key components are MnSO4, NiSO4, copper foil current collector and aluminum foil current collector. If such high value components are produced in India, the global manufacturing industry can be targeted, which would largely boost exports.
In case of graphite, existing reserves should be evaluated for large flake graphite content which is directly used as anode material. Synthetic graphite produced from coke is finding increased use as an alternative anode material. Even if reserves are inadequate, facilities for processing ore and producing a high value product for Li-ion batteries can be set up locally. Use of silicon as an additive has increased in anode materials. Local production of silicon can also benefit cell manufacturing.
For other raw materials (Co, Li) for which there are no existing reserves in India, adequate arrangements for procuring ores or concentrates from other countries should be made. Localized processing of lithium concentrates is beneficial to the battery industry from a reliability and purity perspective. Purity of lithium raw material such as Li2CO3 and LiOH is crucial for achieving long cycle life. It must be understood that having reserves is only one component of the value chain. After mining of ores, there are several other steps such as concentration of ore, refining, purification and synthesis of active anode and cathode materials, which can all be domestically done even in the absence of reserves.

Can India play a leading role in development of next generation technologies? Recommendations for strengthening feedback mechanism between industry and R&D community. 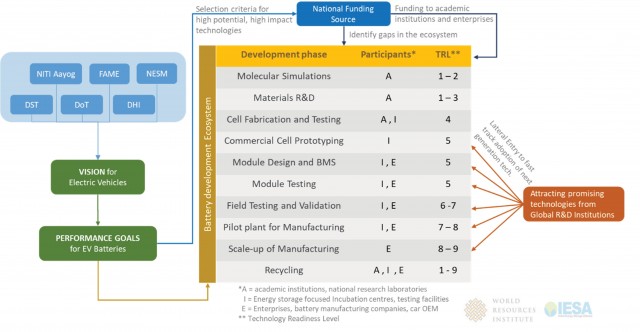 Keeping an eye on electric vehicle and renewable energy penetration in near future, batteries will get significant attention among researchers, manufacturers and application developers. Many of the Indian researchers are actively working on advanced battery technologies. There are however, some major gaps in facilities, which need to be addressed immediately to foster an active collaborative engagement between industry and academia.

Selected institutes should be equipped with facilities for commercial prototyping and testing to demonstrate performance of new developed materials in commercial size cells (TRL = 5). These types of demonstrations are key to attracting the interest of the industry, which can then take the technology further.

Field testing centers should be established where real application testing of commercial prototypes (TRL= 5-6) can be evaluated. Such centers can serve as a good meeting point for technology developers and potential manufacturing partners. Technology incubators are a good medium for grooming PhD and postdoctoral researchers in the commercialization process of technologies. The translation of technological inventions in institutions (TRL = 2-4) to commercial prototyping (TRL = 5-6) is one of the main objectives of technology incubators.

Batteries will generate lot of waste and India is not equipped to handle this. How should the environmental impact be addressed?

This should be seen as a tremendous opportunity rather than a roadblock. The global recycling industry for Li-ion is in a nascent stage and will be massively scaled up in the next few years. If the Indian industry steps up initiatives in this direction, it could lead the way for the world, while structuring an industry that could be a very large employer. A living example of a robust recycling system is that of lead acid batteries where 96 pwecent of batteries are recycled.
Development of a plan for recycling of Li-ion battery should be put underway alongside establishment of giga factories. Used batteries will be a huge source of several important raw materials (several 100 to 1000 tons per GWh). These could be used for battery applications or in other industries such as steel and alloy making and in chemical industries.
The world is witnessing a complete transformation of how we obtain our required energy and the countries which are leading this transformation are bound to benefit from it. Being a tropical country, India has an immense potential for renewable energy generation. It is up to us to realize this and begin to work in the direction of developing the necessary advanced storage technologies, which would allow us to benefit from this resource. So how long before India finally takes the plunge?

[ This article is extracted from the report 'State of EV Battery Technology R&D and Manufacturing in India', That has been jointly prepared by Customized Energy Solutions (CES) and the World Resources Institute (WRI). The authors of this report are Dr Satyajit Phadke, Harsh Thacker, and Dr Rahul Walawalkar ]
Author : IESA
Related Tags
INSIDE TECHNOLOGY