The State of Rajasthan has enabled sustained growth by attracting investment in the chemical, food, and beverage, and petroleum manufacturing industry over the years; a similar strategy is essential in the EV and battery manufacturing space. 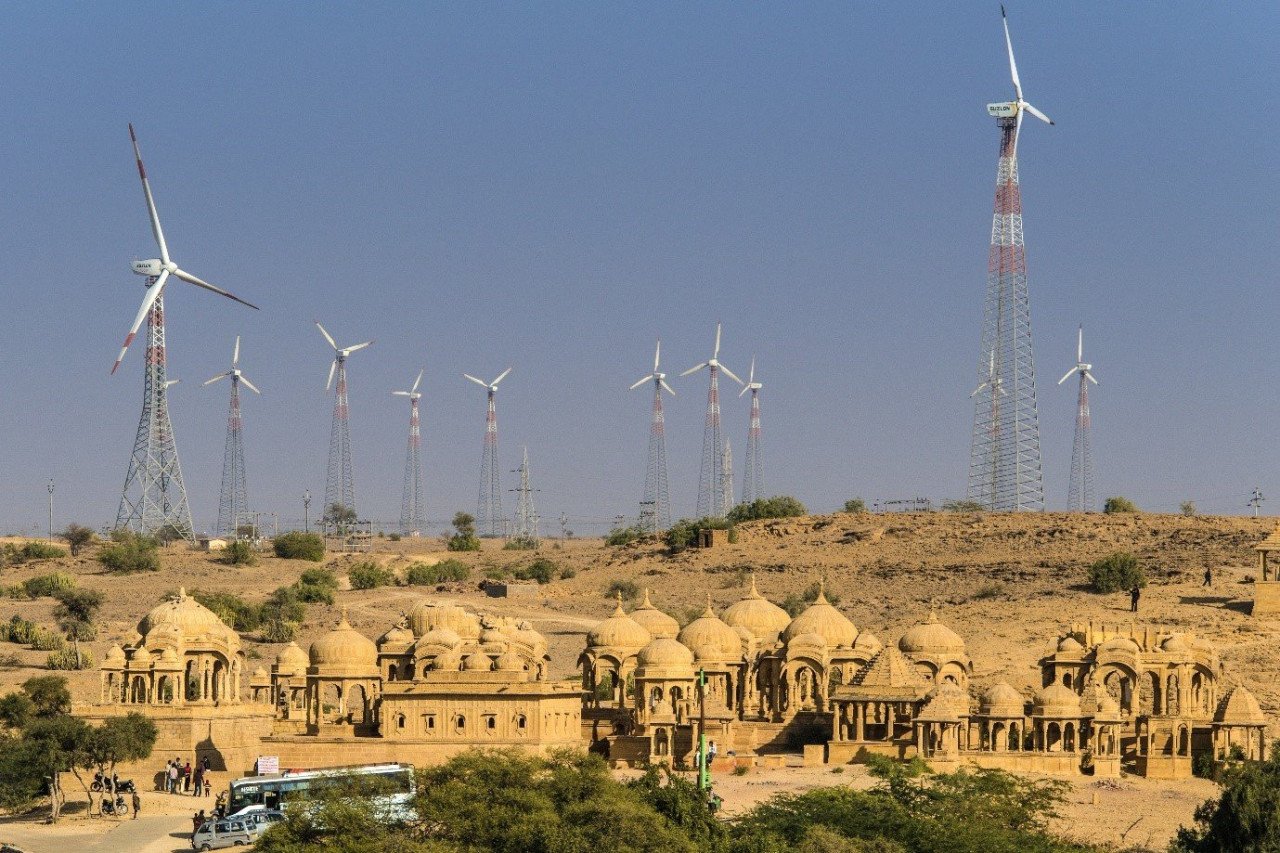 The government of Rajasthan in recent times has announced impressive policies and regulatory developments that are attracting energy storage and EV industry towards the State. It has taken measures to create a policy environment that nurtures private enterprise and makes investing in the State profitable. In addition to a general package of financial incentives, sector-specific policies have been formulated to promote investment. As per the recently announced, 4th edition of the Business Reform Action Plan (BRAP) Ranking of States, Rajasthan led the several Indian States in introducing business reforms and ranked 8th among all the other States.

Catching up with the trend to include storage as part of their RE policies, the government of Rajasthan introduced Solar Energy Policy and Wind & Hybrid Energy Policy in 2019, with definite capacity targets and impressive incentives for storage systems to make RE a more cost-competitive and reliable source of energy for consumers. Now, the State is all set to release its EV policy with a special focus on additional benefits for fleet operators (given its attractiveness for the EV industry, especially for the mega investors) incentives for manufacturers, R&D, and startups.

This article gives an overview of opportunities available for the storage, EV, and manufacturing industry that can be explored in the State of Rajasthan.

Rajasthan power sector at a glance

The power sector in Rajasthan received an impetus with the formation of the Rajasthan State Electricity Board (RSEB) on July 1, 1957. The power sector received priority and power projects began to mushroom all over the State. Under new power reforms undertaken by the State Government, on July 19, 2000, RSEB was unbundled. Thereafter, planned growth in installed capacity, transmission network, and rural electrification took place. It might be noteworthy that Rajasthan has introduced a policy for promoting the generation of power through non-conventional energy sources in the year 1999, much before the notification of the Electricity Act, 2003. After the notification, a comprehensive policy for non-conventional sources such as solar, wind, mini/small hydel, bio-mass, etc. was introduced in 2004 through the 'Policy for Promoting Generation of Electricity through Non-Conventional Energy Sources', considering the huge potential of these sources in the State.

The government of Rajasthan (GoR) notified the Rajasthan Solar Energy Policy in 2011 with a target of making the State a global hub of solar generation capacity of 10,000 to 12,000 MW in the next 10-12 years. The policy was in tandem with the MNRE Jawaharlal Nehru National Solar Mission (JNNSM) scheme.

The total installed generation capacity in the State is around 19,135 MW as per the Rajasthan State Load Despatch Centre. Around 45 percent of the power is generated by State Generating Stations (SGS) and the remaining energy is produced by RE sources, independent power producers (IPPs), and captive power plants (CPPs). To keep pace with the changing needs towards the renewable generation sector in the State, Rajasthan issued a new Rajasthan Solar Energy Policy 2019 and Rajasthan Wind and Hybrid Energy Policy 2019. As per these two policies, the government has set a target of installing 30,000 MW of solar power projects, 4000 MW of wind projects, and 3500 MW of hybrid projects.

A total amount of ₹88.07 crores has been released as Central Financial Assistance (CFA) to the State of Rajasthan during the last three years and the current year, for implementing various RE schemes/programs. The solar tariffs have also declined in recent years and have slowly reached, and many a time breached the grid parity level. The solar tariff discovered at Bhadla (Phase 3) Solar Park (₹2.44 per kWh) was lower than the average power purchase cost of the DISCOMs. In the recent auction, a tariff as low as ₹2/kWh was discovered. 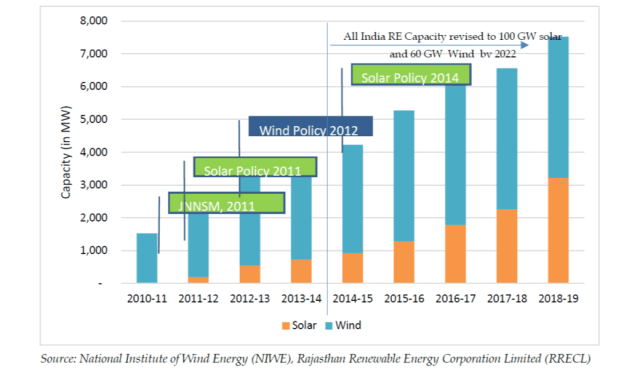 The minimum rated energy capacity of an energy storage system (ESS) shall be equal to 'X/2' MWh, where 'X' is the installed capacity of the project in MW. For RE projects with storage systems, additional land will be allotted as per the rules prescribed by the Revenue Department, GoR. RVPN will develop a plan for storage system requirements for Rajasthan State to mitigate the unpredictability and variability of RE.

While the State is gearing up to increase its potential to fulfill the RE targets, large-scale RE integration with the grid can lead to significant challenges, which are both technical and economic in nature. To address these challenges, Rajasthan has released a concept paper on the framework for 'Large Scale Integration of Renewable Energy using Energy Storage Systems and its Impact on Tariffs', in March 2021. Although some of the points mentioned in the policy warrant further study and clarity on the availability on a range of technologies available across the energy storage value chain and different benefits offered while utilizing the different applications, what is noteworthy is the openness of Rajasthan in exploring different applications of storage w.r.t transmission, ancillary service, and behind-the-meter (BTM).

As per the FAME India website, EVs sold in Rajasthan make up 6.21 percent of the total sale in India, and stands at around 17,405, out of which 76 percent are two-wheelers and 24 percent is from four-wheelers. Rajasthan has, over the past decade, implemented a strategy that focused on supporting sustained and inclusive growth by attracting investment in the manufacturing, especially the chemical, food and beverage, and petroleum industry; a similar strategy is essential for a successful roll-out in EV and battery manufacturing. Rajasthan ranks no.1 in export preparedness index 2020, under the landlocked States category. Moreover, it has a vast network of national highways and railways, which provides excellent connectivity to major cities and ports in Gujarat and Maharashtra. 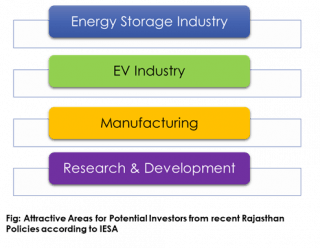 At present, the Rajasthan EV policy is in the draft stage and is intended to be finalized within a month. Highlights from the draft EV Policy have been presented during RIICO (Rajasthan Industrial Development and Investment Corporation) industrial meet arranged in 2021. Key features of this policy include the focus on bulk adoption through additional incentives to fleet operators such as ride-sharing, e-commerce, and logistics companies. Special provision is given to enable government departments to route phased transitions to EVs. A special financing scheme is being offered for individuals and small EV operators. State Regulatory Commission, RERC has approved the final order related to charging infrastructure and tariff for EVs vide which it was proposed that charging stations be set up through Discoms, private and PPP models, incentives to public charging stations, ISTS charges exemptions, rebate in tariffs, etc.

Apart from the EV sector, Rajasthan is also showcasing a lot of interest in encouraging manufacturing opportunities in the State. Recent improvements such as ease in allotment of land and obtaining construction permits, convenient procedures for setting up business in Rajasthan, eMitra kiosks, and common service center for making online applications and payments, etc. Rajasthan Investment Promotion Scheme 2019 has proposed a Capital Subsidy equivalent to 25 percent of investment made on the plant and machinery, subject to a maximum of ₹50 lakh, other exemption benefits, customized packages based on investment, and employment opportunities provided, etc.

Among all the challenges pointed out in the above figure, currently, the major roadblock for the successful implementation of EVs in the State is the lack of charging infrastructure. When EV charging stations are limited to only a few numbers, it discourages consumer's shift from conventional ICE to EV. There is also no specific framework available right now in the State for the installation of EV charging infrastructure, which leads to uncertainty among stakeholders/investors. At present, the sanctioned load of EVs currently is hardly around 0.9 percent of the total demand in the State. With the increase in penetration of EVs over the years, the situation would have to be assessed again, to check the impact of EVs on the grid.

With the right kind of attention from potential investors and developers in growing up along with the improvement in policy and regulatory regimes, Rajasthan State should really focus on suitable measures and promotions to utilize the interest from prospective investors. Rajasthan has a clear potential of emerging as a flag barrier and front-runner among all other States w.r.t storage and EV sector development, but only if it is supported with a strong policy and regulatory framework, focus on R&D and investment opportunities, among other measures. Leapfrogging from KWh to MWh, and trending at GWh
Read More