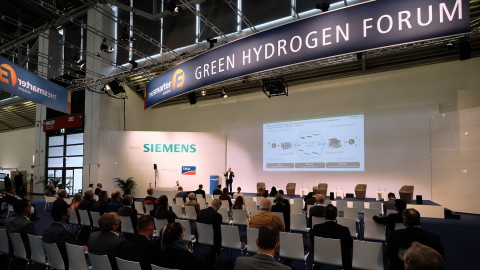 Europe's largest and most influential exhibition for batteries and energy storage systems saw a slew of product innovations and technical development. The focus of this year's ees Europe was a secure and environmentally friendly energy supply in Europe, centred around renewable energy, battery storage solutions and green hydrogen.

The 2022 edition of 'The smarter E Europe' events has attracted record numbers of attendees this time, with over 65,000 visitors from 149 countries learning from 1,356 exhibitors from 46 countries. Sharing a common vision of clean and secure energy future, the event consisted of four parallel exhibitions, namely ees Europe, Intersolar Europe, Power2Drive Europe and EM-Power Europe, held at Munich this month.

"As far as ees Europe is concerned, there couldn't be a better time to bring together manufacturers and customers with the aim of playing a critical part in hurrying along the energy transition in the home", said Oliver Koch, CEO of sonnen GmbH.

The expo also saw the announcement of ees AWARD for innovation in energy storage, and discussions on a study on the use of hydrogen in the steel industry and various forward-thinking scenarios for the industry at the Green Hydrogen Forum.

"We were delighted that the concept of sector coupling was so high on the agenda at ees Europe 2022. This was the topic that our visitors found most interesting and fascinating", commented Ove Petersen, co-founder and CEO of GP JOULE.

The ees Europe affirmed the industry that the production capacities for lithium-ion batteries are growing faster in Europe than in any other region of the world, with billions of investments on the anvil. Current forecasts predict that the continent's share in this global manufacturing business will increase from around 10 percent now to 25 percent by 2030.

Alongside projects by European manufacturers such as Freyr, Northvolt, VARTA and Saft, numerous production plants are also being set up in Europe, and in Germany in particular, by businesses from elsewhere such as Samsung SDI, LG Energy Solution, Tesla and CATL.

Green hydrogen was yet another theme receiving spotlight at ees Europe 2022. The Green Hydrogen Forum and associated exhibition space provided an important industry platform for the hydrogen economy, which is looking to develop new international supply channels.

"There is no mistaking the optimism radiating from the hydrogen industry," opined Werner Diwald, Chairman of the German Hydrogen and Fuel-Cell Association (DWV). "The industry is ready to pool its expertise, experience and determination to push the acceleration of a green hydrogen market economy."

The forum also discussed on a latest study titled "Steel from Solar Energy" by Jorgo Chatzimarkakis, CEO – Hydrogen Europe. "This study shows that, owing to the energy price rises, the use of hydrogen in the decarbonization of the steel industry can be economically viable much sooner than recently predicted" he said.

The next edition of the 'The smarter E Europe' is scheduled to take place from June 14 to 16 in 2023 at Messe München, Munich, Germany.