Oxford city to get superfast chargers at Energy Superhub 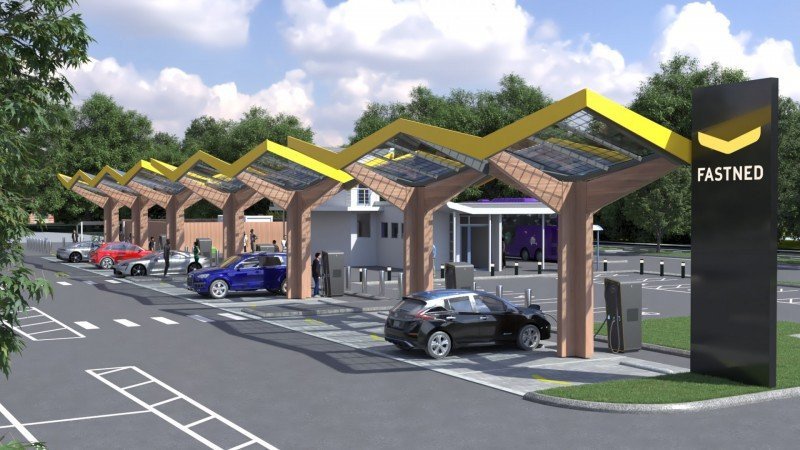 Fastned, a developer of fast-charging infrastructure across Europe has teamed up with Oxford City Council, Pivot Power, and Wenea to build and operate one of the largest fast-charging stations at the upcoming Energy Superhub Oxford.

Energy Superhub Oxford is a consortium of six partners led by Pivot Power, coming together to lower Oxford's carbon emissions and clean up its air. The plan for the hub is to install up to 50 charging points at Redbridge Park & Ride for public use, including a combination of ultra-rapid DC chargers and fast AC chargers catering for the full range of vehicles.

The Fastned station is a part of the bigger Energy Superhub Oxford and will have up to 14 fast chargers, where electric vehicles can simultaneously charge with a speed of up to 300kW. In addition to Fastned chargers, the hub will have 12 Tesla superchargers and Wenea charging points. Pivot Power, a battery technology company and an arm of EDF Renewable, will provide 10MW of renewable power and battery storage for future expansion.

Councillor Hayes added, "the ambitious urban decarbonization project which will encourage more businesses to invest in the city."

The share of fully electric vehicles among all newly registered cars in the United Kingdom is increasing rapidly, growing from 1.7% in 2019 to 6.6% in 2020, as per Fastned.

"Our mission is to accelerate the transition towards electric mobility by giving freedom to electric drivers," said Michiel Langezaal, CEO Fastned.

"We need hundreds more and will therefore continue to engage with landowners and partners such as Pivot Power across the UK. Big stations are the only way to provide charging capacity to the exponentially growing number of EVs coming to our roads," Langezaal added.

The Energy Superhub will come up in Oxford city's ring road and integrates with the Redbridge Park and Ride facility. The hub is due to open at the end of 2021.

"Our goal is to help the UK accelerate a net-zero carbon future by delivering power where it is needed to support the EV and clean energy revolution," said Matt Allen, CEO at Pivot Power.

"Oxford is the first of up to 40 sites we are developing across the UK, and we are delighted to be working with Fastned," Allen added.